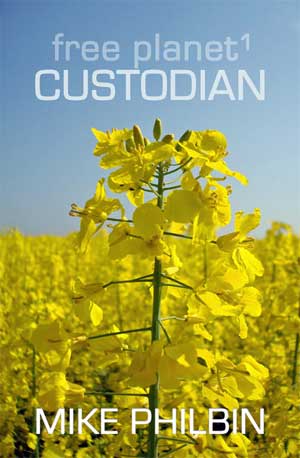 Oxford-based writer/artist Mike Philbin has a long history of writing non-mainstream ‘genreclectic’ fiction that caters to the wilder side of life, the extreme, the bizarre, the downright gut-wrenching, as his 2008 Silverthought novels Bukkakeworld

and Planet of the Owls and his previous works under the pseudonym Hertzan Chimera attest to.

So, what can we expect from this novel that appears to have a more mainstream appeal? Why write a book like “Custodian”?

I started to broadcast the basic Free Planet message of Creativity, Passion, and Kinship via a Do Right By free planet ethos of local solutions for food, shelter, and waste.

But instantly got knocked back, ridiculed, and attacked. “You can’t run an Economy without Profit. Everybody must earn their keep,” said T.H.E.Y. and other such illogical nonsense.

Well, obviously, there’s a TOO BIG TO FAIL mentality ingrained in our commercialised minds that’s literally ruining this once-wondrous world, this free planet, given to us to manage and protect.

And it’s our job (all seven billion of us) to change this so that all can benefit from the intelligence and ingenuity of mankind, not just a select few in off-shore havens.

In book one, mankind learns how to shuffle off the monkey of Commercialism – it’s a global struggle, but one worth the physical and mental upheaval. Book two and book three deal with the fall-out of the TOO BIG TO FAIL protectors’ attempts to re-establish their global reign.

Oh, and we’re not alone in our global struggle i.e. there’s always a bigger fish. It’s all very horrific and insane, but there is hope. Hope that we can see through the lies and deceit of a For-Profit Economy and return to a place that was always meant to be a  “free” in both the financial and ethical sense.

There’s always a price to pay for Creativity, Passion, and Kinship, that’s the premise of this first book. War breaks out, and the next two books show the galactic scope of that war in a way that will shock and astound readers for years to come.