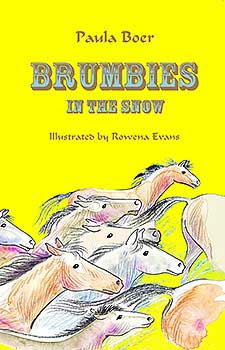 In Brumbies in the Snow, Ms Boer pulls us right away into the details of Ben and Louise’s lives, opening a window onto another world. This one revolves around brumbies and life in the Australian bush for two teenagers. Brumbies are Australia’s wild horses. Ms Boer delineates them with love and the experience of someone who has immersed her life in horses. The numerous illustrations of Rowena Evans have a life of their own. This is a good read at any age.
─ Susan Butler
(Author of Secrets from the Black Bag and Black Bag Moon)

Brumbies in the Snow is the second book in the Brumbies series by Paula Boer and Rowena Evans. It follows the exploits of Louise and Ben, the main protagonists in the first book. Here the setting is in the depths of winter when snow is blanketing the high country and the home of the wild brumbies. Again the writing and the illustrations are of high quality.
The story revolves around the breaking in of the two wild horses that had been captured by Louise and Ben. Coupled with missing hikers, starving horses and the harsh conditions their adventures will cater to the needs of any horse-focused, young adult reader.
─ Michael B. Fletcher
(Author of Kings of Under-Castle)

BRUMBIES IN THE SNOW

Trotting along the familiar trails warmed Louise up. The cruel wind eased but it had started to snow. Large flakes clung to her eyelashes and settled on Ned’s mane.
Louise passed the abandoned homestead where they had mustered the first brumbies back in the summer. That excitement seemed a lifetime away. It had been hot and sunny, and she had only just started riding with Ben. The memory of the holidays brought back to her that Honey had escaped, just when breaking her in had been going so well. She should have been riding the mare this weekend, but instead here she was, out in the snow with Honey gone.
Lost in her thoughts, Louise failed to notice another horse up ahead. Ned whickered and stopped, jolting Louise into awareness. “What’s up? Who’s that?”
Ahead of her, like a shadow in the mist, a black horse stood looking at them, but it wasn’t Snip. Instead of the telltale white patch on Snip’s nose, this horse had a broad blaze. His ribs stuck through a thick unkempt coat, matted and patchy. His hollow-neck seemed too thin to hold up his head. Having returned Ned’s call, he lowered his nose and tried pushing the snow to clear the ground for feed.
Louise couldn’t believe a brumby wouldn’t run away with the approach of a rider. She watched the horse for a moment, realising it must be sick. Then she saw it try to move.
The horse hobbled forward, dragging its near fore. It seemed to be injured above the knee, with the lower limb hanging uselessly and the hoof dragging in the snow. “Its leg is broken! The poor thing is starving! Come on Ned, we need to get help.”

Louise pushed Ned as fast as the conditions would allow, going over the rise to join up with the track that led from the park’s Information Centre to the old road. She knew the trail came out near the locked gate where she had lost Honey earlier in the day.
When they arrived at the road, Louise let Ned canter. His speed picked up nearer to home and they bowled along at a fast pace. Not even slowing down to go through the farm gate, Louise pulled Ned up outside the yards where Ben rubbed down Snip.
“Where do you think you’ve been all day?” Ben glared at Louise as she jumped off Ned and loosened his girth. “And what sort of condition have you got Ned into? Look at the sweat on him! You know to go steady for the last kilometre, even if it is snowing.”
Louise tried to answer but the exertion of the day, the cold and hunger, mixed with the relief at being back at the farm, proved too much for her emotions. She bent over with her hands on her knees and tried to get her breath back… 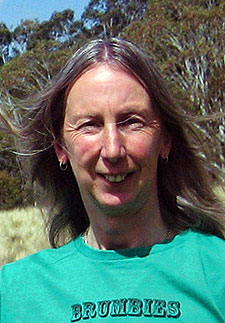 Paula Boer started her lifelong love of horses when she first rode a pony on a ranch in Canada, aged 7. On moving to England at age 9, she commenced weekly riding lessons and became hooked.
Paula’s own writing career started at Tunbridge Girls Grammar School, where she wrote a story from the horse’s perspective for her final English exam. Despite friends and teachers exclaiming that the story was not appropriate as it didn’t contain any people, Paula passed her English Language ‘O’ level with an A+!

After retiring from the hectic life of computer consultancy, she wrote her first novel, The Okapi Promise, based on her adventures in Africa in 1990.
The Brumbies series was created–the first two books, Brumbies and Brumbies in the Snow, were published in 2011 and 2012 respectively (IFWG Publishing). Brumbies has since become an Amazon ‘Best Seller.’ Brumbies in the Mist will be available September 2013.
Paula has had numerous short animal stories published in journals in the UK. She is also a regular contributor to horse magazines, especially HorseWyse.

She lives on 500 acres with her husband, two Arabians, a Waler and a stick-loving dog), Paula is working on the final in the series, Brumbies in the Mountains.