Would you want to live next door to a Hippie? Would you invite a stranger to have dinner and sleep under your roof knowing them for a day? Would you invite them into your home and not worry about whether they might steal from you or not? 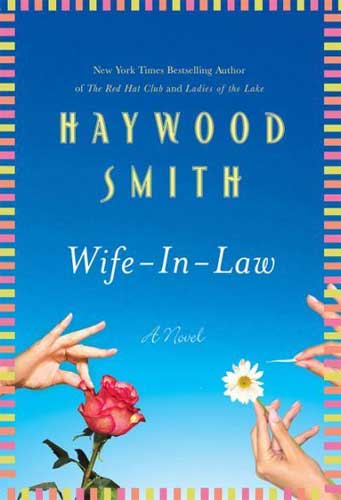 Betsy Callison and Kat Ellis met thirty-five years ago and became lifelong friends. Betsy is very staunch in her ways, prim and proper, and always worried about taking care of her husband’s needs and wants and Kat the total opposite.

Betsy a neat and obsessive-compulsive in her ways concerning how she keeps her house, cooks, and organizes her life, and Kat totally the opposite become fast friends over fried chicken dinner, a quick decision to invite her and her significant other to stay in her house on a hot sweltering night making them become fast friends.

But, what happens next will most likely change everything as author Haywood Smith relates to the reader their meeting, their back stories and their lives before things changed for both of them in this hilarious and yet heartfelt novel Wife-In-Law.

Betsy a Republican with a husband who just got promoted to CPA and has begun traveling a lot and Kat a staunch Democrat and Hippie forms an unusual friendship that takes them across almost four decades.

But, Greg has an affair with his secretary leaves Betsy and winds up with Kat. As the author recounts their early friendship, Kat’s mishaps trying to learn to cook, their encounters before marry her ex-husband you begin to understand how Betsy feels, the frustrations, anger and the way she handles having them live across the street from her.

Added to that the author relates her father’s leaving home, how she felt when left with her mother told in Betsy’s own voice.

The author flashes back to the 60’s, 70’’s and three years before Kat finalizes her marriage with Greg to help the reader understand the decline in their friendship and to what lengths Greg went to destroy it.

As we learn more about their lives before her divorce, we learn about Zach’s undercover job, being shot, and how both Greg and Betsy came to Kat’s aid along with protecting their family. From watching their daughters play Tball to poor Amelia’s fear every time she came up at bat, to Betsy’s pleading with Greg to let her quit but relenting with the promise of ballet lessons, the author give the reader an inside look on their lives, their struggles, triumphs and eventual downfall.

From her father’s betrayal as a child, to her mother’s illness that drove him to leave and her husband’s adultery, Betsy toughens up and withstands it all. As Kat learns the meaning of true friendship, Zach and Greg bond. The first day of kindergarten and the antics Sada and Amelia pull will definitely crack up the reader and make you smile. When two mothers defend their children to one principal will she have a chance against these two headstrong women?

As their friendship grows so does Greg’s hidden problems at work, the arrest of Arthur Andersen his boss, his financial situation and the ultimate deceit as he leaves a note to Betsy stating he is leaving her for his secretary and his settlement in a cold letter followed by the death of Zach from AlS these friends have been through a lot and their loyalty towards each other about to change.

Some men just need someone to cook and take care of them and make them feel important. Greg was always in control of how things were run, what Betsy did and made sure she was the dutiful wife and mother to his children. When going on trips or cheating on her he just about justified his actions and did not consider that she would be devastated or upset.

Coming back after Zach’s death would really change things between her and Kat as Greg decides to become a member of Kat’s family and poisons her mind against Betsy, her best friend. Will their friendship survive and what will happen when they flaunt their relationship in Betsy’s face and decide to take the plunge and get married?

Betrayals, disloyalties, love, hate relationships, past experiences revisited and two friends who friendship is tested to the limit. Remembering her father’s desertion, Kat’s childhood experiences and much more what happens next will surprise the reader.

Author Haywood Smith brings to light many issues that some face today that of adultery, divorce, child services intervening in Betsy’s life when she wanted to go with her father and was told she could not, children that stick together and true to life experiences dealing with death and survival that provide humor, tears and understanding in the lives of these two women that are not that different from many today.

But, then one woman’s gossip causes so much pain as the two friends come to a crossroads and a rash decision is made costing someone their life. Why and who you need to find out for yourself and will forgiveness ever be said between these two close friends?

As Betsy’s mother creates a new life for herself and many lies revealed and truths told what will happen to those living on Eden Lake Court? What will happen to Kat and Betsy and what does happen to them will definitely make you smile, possibly double over laughing and renew your faith in good old fashion high jinxes, smart and sassy girl power, survival of the cleverest and just plain love.

How this all turns out will definitely make you want the author to bring these two back again for more? Wife-In-Law is a must-read for those who want to know what to do when your husband strays, your best friend marries him and your own mother is nuts. T

old in Betsy’s own voice you hear her words, true feelings, emotional battles and triumphs. Author Haywood Smith definitely created the right formula for mystery, suspense, romance, and much more in this great novel.

This is one novel that will bring smiles to your face, cheers when things go right, laughter when they go wrong and definitely make you wonder just how far two women will go to remain or not remain friends. Find out for yourself when you read this Five Star Book.