This woman’s main preoccupation is this: she does not look like a princess but is one. This is also a tale of murder by treachery and of warfare. Honor is destroyed when they just are not championed. 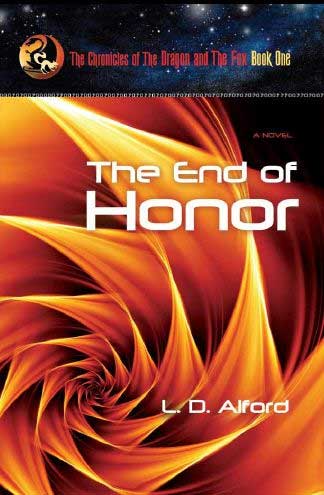 The second two-thirds of the novel are more male and action-oriented: it is about war. The purpose of the war: to restore honor to the defiled. Jealous brothers are the backdrop for the drama in this novel.

They are cast: there is the good son who is loyal and proud and his nemesis the treacherous son. Political intrigue is the very backbone of the circumstances which drive the plot forward throughout the novel. The novel is reminiscent of TV series’ in that everyone knows who the villain is from very near to the beginning. When his treachery appears, the main transformation is that the large population affected have to come out of denial and do something about it.

The End of Honor is set in the unfathomably distant future. It is typical science fiction in the fact that it involves interstellar politics. Although human nature and political behavior do not seem particularly advanced compared to 2011 there are technologies and locations and possibilities that are far beyond anything known in the 2011 Christian Era/4708 Hebrew & Chinese year. The main characters are aristocrats in a world that is not democratic.
The author displays the realities of leadership: there are limits to what any one person can do and these limits are partially enforced by the so-called followers. A leader without followers, after all, is nothing. There are swords in the story. There are also space ships and the mining of radioactive heavy metals from the surface of a star. The pace of the novel is moderate. Itis an ‘easy read’. This novel is the first in a series, which is obvious by the type of conflict resolution used to finish the story.
Continue Reading
PoliticsRadio and TV
0
Share FacebookPinterestTwitterLinkedinReddItTumblrWhatsAppScoop ItMediumEmail
MiriamSPia

Fran Lewis Feb 4, 2011 2
How Many Itis's Going to the doctor can really try your patience, sense of humor, and stress level. Ever go to the…
Writing