In the thrilling Shadows of Suspicion we follow Kerry through her nightmare of being targeted by a mad man, and rescued by a faithless man. 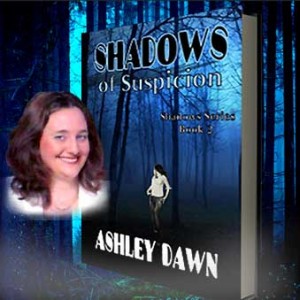 Luke Reeding is a complicated man, but the best at his job. Kerry’s brother Rick calls in a favor and asks Luke to help the family keep Kerry safe until they catch Chris Deveraux. One look at Kerry Reiley and all Luke can think about is keeping her safe. While Kerry relies on her faith in God and her tight knit family to see her through she is torn by Luke’s lack of faith. The son of a hypocritical preacher, Luke pushed God out of his life years ago.

Can Luke and Kerry survive one another, a deranged killer and a difference in beliefs long enough to catch a killer? Well that information is “classified”!

This book is one of those rare sequels that excel well beyond expectations, possibly even surpassing the first book. Again Ashley Dawn writes characters with such strong emotion and human connections to one another you can almost reach out and touch them. Luke Reeding is every woman’s man. Polite, strong, protective, gorgeous and mysterious, you’ll wish someone took you hostage just so he could save you.

Full of wit, romance and danger you will laugh, cry and find yourself wanting to yell advice at Luke and Kerry page after page. Perfectly sprinkled with action and faithful scriptures you won’t want to put it down until the end!

Author Ashley Dawn was born and raised in rural Arkansas where she developed her love for writing while helping in her parent's office. She graduated with an accounting degree from the University of Central Arkansas but is currently working as a legal assistant. Ashley has been writing professionally for the past seven years and has two published books. Her first book, Shadows From The Past, was originally published by Tate Publishing and is considered more of a traditionally published book while the second, Shadows of Suspicion, was published by self publication using AuthorHouse. Both books have been published in ebook form by Suspense Publishing. She is currently working on multiple projects including the third in her ‘Shadows’ series entitled Shadows of Pain and also a standalone mystery about a serial killer that remains untitled. Ashley also has a review blog to share her love of reading, Ashley’s Bookshelf, where she reads and reviews books of all genres. (http://ashleysbookshelf.blogspot.com) She and her family make their home in Texas.

Dellani Oakes Nov 9, 2011 0
Fran Lewis is an amazingly talented, creative, inspiring and thought-provoking author. She's also one of the…
Society