There are many ways people connect and form lasting relationships in their lives. Sometimes from that first encounter you can tell things will work out and other times not. When Eve Duncan met Jane McGuire she knew right away that this ten-year-old child who lived on the streets, was tough and streetwise would be the right fit for her and her world.

Eve Duncan, forensic sculptor able to recreate the face of anyone just from the skull and bring life and meaning to someone who has had an unfortunate death. Closure, bringing the person home something she has still not done with her own daughter, Bonnie that has haunted her mind, days and dreams for many years. But, all that is about to change and much more as Joe Quinn, a police detective, her live in lover, has been critically shot and this is where our novel begins. Quinn is the second of three in the trilogy by author Iris Johansen. Starting with the inner thoughts of John Gallo, a killer, a psychopath noted to want Joe dead, killing others and thinking he might have murdered his own daughter, Bonnie, the novel begins with John on the run. Next, we meet Jane who reenters the story as she and Catherine Ling discuss the events that led up to Joe being shot, what their link is and what to expect next even before she sees Eve. 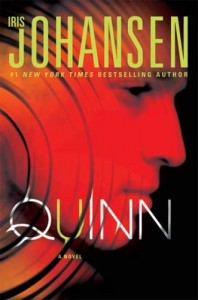 Let’s go back in time to where it all began. Take the journey along with Joe and Eve to when Bonnie was taken, they finally met, how their relationship began and learn why they have such an unusual and strong bond. Find out why Bonnie comes to her in her visions and why she needs to bring her home.

As the author relates how Joe and Eve met you can tell from the start that there are two very distinct and strong personalities that have to mesh. This won’t be easy as they get off to a rocky start from the beginning. Eve meeting Joe and investigating him to make sure she can trust not only his judgment but also him as a person too. Eve wants to be part of the investigation into finding what happened to Bonnie but Joe’s personality comes through, he’s tough and it will take a lot for him to allow her to work through some of the cases of the other missing children to see if there are any similarities among them.

From the moment they met the chemistry between Eve and Joe was electric. Their encounters were tense and their understanding of each other created as time goes on. The author relates the story of how they met and what happened to Bonnie and who might have taken her. For those who have never read Faces of Deception the first Eve Duncan book, reading Eve and Quinn will definitely help you understand why she was so obsessed with finding her daughter, bringing her home and never leaving any stone unturned. Eve begins to work with Joe in order to help with the missing children’s investigations. Persistent, diligent and definitely strong-minded and not to be trifled with describes by Joe and Eve as they begin forming a relationship and understanding before the author brings you back to the present.

When Eve faces the man she thinks is the killer the closure she wanted to find Bonnie does not happen. When the warden alights from the prison telling her of his execution she feels a hole in heart that will never be repaired as she can no longer find her remains and bring her home. Who was this man who called himself Zeus who killed so many including one reporter that led her to him? What will be the final fate of everyone?

Can a spirit bring a person back and make them fight to live? As Joe begins to make the journey back to Eve he finds himself drawn by the words of Bonnie who helps him find the way. At the same time Catherine has found her path to Gallo’s cabin, the local sheriff and his team backing off on their investigation and she is now alone. Coming face to face with him proves interesting as two adversaries learn more about each other and what happens to bond them will surprise the reader and help you understand just how power Gallo really is, how convincing and the effect he has not only on Eve but on Catherine too. From his cabin to the tables in Las Vegas they race to find the answer to who killed Bonnie but instead are left with more questions. As Joe is released from the hospital and they all meet together at the cabin, the end result proves fatal for one man and an unknown assailant once again places them in danger.

As all four meet and one man’s life hangs in the balance what happens next will surprise the reader and let you know that the end has still many more chapters to come. As Catherine faces the killer, Gallo is in the background, Joe has his gun ready and her final fate about to be decided, author Iris Johansen throws huge curve ball, with a surprise ending and cliffhanger.

What does happen you won’t find out until October 18th when the third and final book in the trilogy comes out. You too will have to wait for BONNIE in more ways than one. What happens to Catherine to enlighten her to who Gallo really is? Why does she trust him when others tell her not too? What happened to cloud her vision? What will happen to Joe and Eve? Fast paced, jam packed with suspense and five well defined characters each with distinct personalities, their own way of thinking but with one mission in mind:
FIND WHO KILLED BONNIE! One question.
No definite answer. One outstanding novel.
Can’t wait for the third.
WHO KILLED BONNIE? IS THE KILLER STILL OUT THERE?

Excerpt: Children are from Heaven

Turn Up the Heat