Review: One Door Away From Heaven

Micky immediately becomes acquainted with the young girl next door, Leilani Klonk.  Nine year old Leilani seems older than her age, but she also lives with a terrible secret.  She sees herself as an undesirable cripple, getting around with a leg brace and managing with a deformed leg and hand because of the debilitating damage done by her mother’s drug addiction while in her mother’s womb. 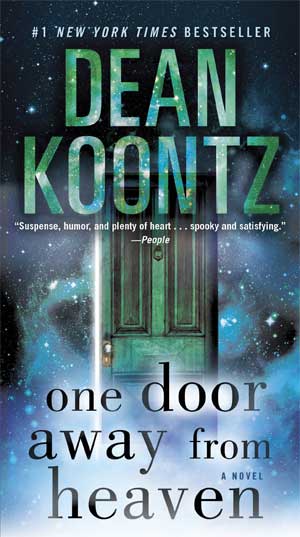 Over the course of the story, Micky and Aunt Geneva draw small hints about Leilani’s dark secret out of the girl.  Leilani seems to be looking for help, but does not want to endanger her new friends either.

The second story is that of a mysterious boy who seems to have run away.  But what he is running away from is much bigger than home and a family.  He imagines monsters everywhere as he flees from his mother’s killers.  As the boy draws us through his story we also learn that he is more than he first appears to be.

The ten year old boy decides to go by the name Curtis Hammond, the name of a boy whose family was murdered after he sought refuge and food in their home while they slept.  The only survivor, their dog, becomes the boy’s companion on his journey.

Noah Farrel, a private investigator, brings with him the third story.  He seems to be something of a mediocre investigator right from the start.  Noah proves to be a reluctant participant, drawn into the story as their lives begin to converge when Micky becomes suspicious of Leilani’s parents and seeks the help of a private investigator.

As the lives of Micky, Leilani, Curtis, and Noah draw on inexorably towards the point where they will inevitably come together both Leilani’s and Curtis’ secrets are drawn into the open.  Leilani’s by her deranged step-father and drug addicted mother and her attempts to survive, and Curtis’ by the relentless hunt of his pursuers.

Dean Koontz has stayed true to form in creating a suspenseful story that entices you into the lives of the characters with the need to find out where their lives will collide.