Kingsblood Royal is the last good book from Sinclair Lewis, the first American to win the Nobel Prize for literature.

Sinclair Lewis wrote his stories with brutal honesty. Realism. Yet, you will not find him as a popular read in university, or in the big book chains. Sinclair Lewis was eclipsed by John Steinbeck, F. Scott Fitzgerald, William Faulkner, Ernest Hemingway, and others. 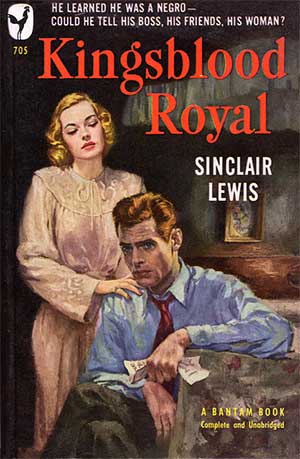 Kingsblood Royal is about Neil Kingsblood, a soldier who returned from WWII to his small town, married his sweet heart, has some kids, and becomes a banker. It is safe to say Neil Kingsblood saw a VP position that would soon open up for him in his place of employment. To add to his glow, everyone in his family was convinced they came from an old British aristocratic family.

This all led to Neil Kingsblood to go and research his family history. Much to his shock and dismay, he discovers he came from African American blood. Yes, he’s a decorated soldier, a family man, VP material, and a proud Republican…yet he reached out to African Americans that he oversaw as Captain in the military. He met them in this area, in their place of association.

Eventually, he came out as an African American. Then his life unraveled. His friends deserted him; he was forced to leave the bank for someone who would hire a person in his bloodline. He loses his home and gets loaded into a police van at the end of the book because the townsfolk turned against him.

Is Oprah Winfrey producing and starring in the film version for Kingsblood Royal? Only if I suffer from rational delusions.

Government and the People

Caryl McAdoo Feb 16, 2014 4
After The End 2 IT BEGINS! How does a writer go about getting a manuscript read by an agent or editor after …
Publishing