What amazes about Judi Dench is her consistent work in 88 roles in live theatre, some three at a time simultaneously, 33 television roles, with “As Time Goes By” running eleven years, and 35 films and still getting roles and working. Recently, I saw her in “The Magnificent Magnolia Hotel.” 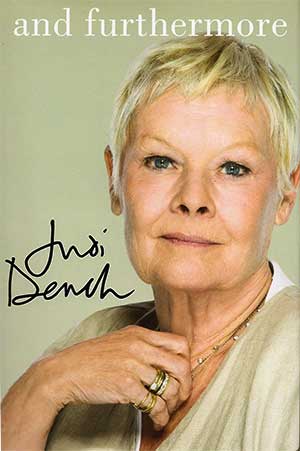 In “and furthermore”, you get to join Judi Dench as she lives her life, plays her parts, interacts with her friends and family, share her thoughts about it all, as if just for you, as two people having a story tea time. That’s the beauty of the gift Judi and John gave me as I sat with my tea, turned the pages, laughed out loud, shed some tears and thought about the amazing amount of great work Judi Dench accomplished in her lifetime. I especially liked going with her to the Academy Awards Ceremonies, meeting all the stars,  hearing about all the behind the scenes secrets. Judi Dench is a great storyteller with John Miller!