Carolyn Howard-Johnson and Magdalena Ball have woven their Imagining the Future: Ruminations on Fathers and Other Masculine Apparitions (Volume 1) on March 22, 2010, together like sisters of the same mind when it comes to the men in their lives.

Carolyn begins her medley of childhood memories beginning with “All the sound in the world sucked to a waving wailing note as I perch on my father’s knee.”  Later giftedly pondering, “The things I didn’t know about my father, his coming and goings, the fearing he would not return. One day, only a dawn or decade ago, he didn’t.” 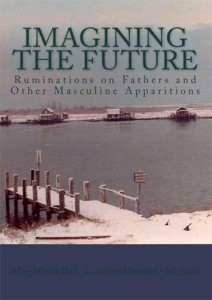 “Then, then!” writes Carolyn, “Decades of dread (conflicts?) with names we remember and some we don’t. Bosnia, Kosovo, First (!) Gulf War, Korean, Bay of Pigs, Rwanda,

Afghanistan, the Berlin Crisis for god’s sake. More than 300 of them, words

like the bass beat of drums. Vietnam when those troops who did come home

couldn’t walk or wouldn’t talk. I tell my grandson, then only 12, how we who remember the grunt of that war see it differently from those who marched in the Double W Wars,

wars when we wanted to be there.”
Carolyn Howard-Johnson’s grandson served two tours in Iraq. Her husband is a retired Army officer who served in the 1960s Berlin call up. I can hear the sober sounds of the National Anthem in the background of all her poetry, with the throat voice of Uncle Sam warning, “I want him. He’s mine. You can’t have him!” All wives and little girls cry.

Magdalena pulls metaphors out of the air with, “You recede a little more. I reach for you over thought waves little girl’s hand hung in the air your absence, finally, matches reality to imagination trying to get truth from pretty metaphors that can’t touch your flesh still young somewhere while the precious science you drank like fine wine grinds your atoms to dust.”

Carolyn Howard Johnson and Magdalena Ball have written a wonderful little memoir celebrating Father’s Day and all their sacrifices as girls and women growing up in the 50’s and together they swam through a remembered past. I recommend this little gem and I give it Five Stars for Amazon. Happy Father’s Day to all…wives, children and our husbands who take care of our very basic needs while we write poetry.

When Did These Changes Happen?