The short of it: It was excellent.

Royce Hall at UCLA is as always an excellent venue.  The hall was packed.  The Polish Consulate sent a full delegation and the Consul General Ms. Joanna Kozińska-Frybes made quite good remarks about peace and reconciliation as well as dedicating the evening to the Blessed Pope John Paul II. She also thanked the previous Consul General Paulina Kapuścinska who was in the audience. 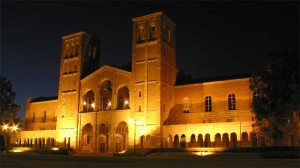 This was followed by Mozart’s Sinfonia Concentrante – performed exquisitely by the American Youth Symphony.  I fell in with the music into a light trance – I could hear the rhythm – and I felt the music enter my flesh.  It was very good, they are well primed and very disciplined.  At no point did their youth stand in their way of a professional performance.

This was followed by a brief intermission during which greetings between people were exchanged, the smokers took to the fresh air, the non smokers opted for stuffy halls.

The second act was introduced by Charles Fox who explained his Polish heritage and his reasons for being involved in the project.  The performance of his composition was preceded by a clipped version of a documentary film, on the state of Polish-Jewish relations and the revival of Jewish culture in Poland entitled “100 Voices: A Journey Home.”  The film did a good job in setting the stage for the piece.

I leaned forward to fully appreciate the full measure of the oratorio “Lament and Prayer” and the Cantorial performance of Raphael Frieder, it was quite probably the best thing I have heard along the lines of Classical Music in the last few years.  In fact it was breathtaking.  Raphael Frieder could have used a better microphone.  Charles Fox included along the original English language words of the Pope John Paul II prayer that he placed in 2000 at the Western Wall in Jerusalem – also a Polish language and Hebrew language translation – he called this decision one of necessity, as those three languages: English, Polish and Hebrew represent the whole world.  Fascinating.