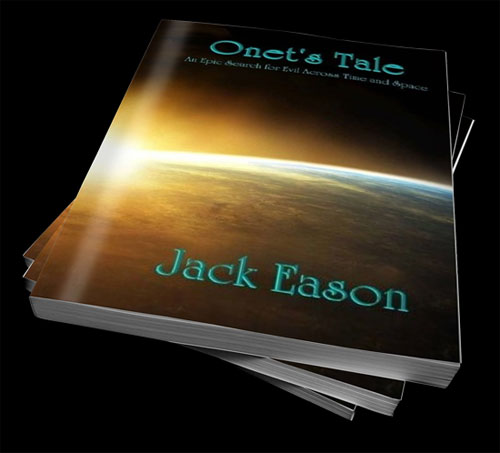 This epic sci-fi tale from Jack Eason includes a large cast of characters from various planets, including the human/nephile Akhen and Khan, who is a Drana. Once enemies, the two band together to escape the mine and start a rebellion that eventually leads to a war that spans years and galaxies.

The story itself is narrated by Onet, who happens to be a Khaz. Think little gray alien guy that might land in Area 51. Except Onet is albino and has red eyes.

He’s watching all this unfold, waiting for his chance to stop the evil that his own kind started, which spread through a goddess-type being called Shu, and continued through her horrible creations of berserker warriors.

Murder, war, and mayhem reign throughout this book, while the main characters try very hard to live normal lives. Their efforts are always ripped out from under them, and I sympathized with the tortuous events they lived through.

On the other hand, I kept wishing for more character depth. I’m really partial to character-driven novels, and this one seems mostly plot-driven. For me, I would have liked to have been inside the characters’ heads more, really feeling what they feel.

This is the first work by Jack Eason to be published and yet this book has the feel of a seasoned Author. The consideration and detail in which Onet’s tale is written never allows the reader to wonder about anything for too long.

Every plot twist, each character and every action they take is just one small brushstroke of a much larger painting. All actions have consequences and all consequences are vital to the story. The web of intrigue, spun so subtly by the Author, unravels with each turn of the page. The bigger picture only begins to come into focus when all the other pieces are in place.

I find it very difficult to say exactly what Onet’s Tale is about because it isn’t solely about one thing. The story has many leading characters and many different reasons why each would be where they are and why they are a part of the story. I could condense the entire story to just a few words..”A tale about the struggle for survival against all odds”..but this doesn’t do it justice.

The battle for survival isn’t confined to just one person, nor even to an entire species. It encompasses all life in both this world and in many others that wish to live without fear and oppression.

A species that come from further away than most can imagine are hell-bent on the complete annihilation of all others, forsaking none. The ensuing struggle spans the face of our galaxy and the lives of each and every living being within it.

The fate of future history is in the hands of a reluctant few. Outnumbered and outgunned, the battle begins.