The story literally grabs you from the very first page. It absorbs the reader’s whole attention at once while recognising a unique writing style of Caleb Pirtle III.

I read his work before, I ‘met’ his Ambrose Lincoln before, but Mr. Lincoln doesn’t wait to be recognised – he takes you straight away, from the first page, on an incredible journey through war-torn Europe, trying to outsmart whoever crosses his path, including the Fuhrer himself. Is he brave, gutsy, almost invincible, and the only question Ambrose imposes upon the puzzled reader is: ‘Who the hell is he?’

Is he human at all? How many faces does he have? How many lives? How many philosophies and stories? The scenery is changing fast; characters are dynamic, smart. The characters are offering more than just good entertainment. Pirtle does offer it. He offers much more than a fast-paced, action-packed thriller. His well-structured sentences are statements about his craft. What I like the most when it comes to Caleb’s sentences is – they somehow remind me of Somerset Maugham’s long sentences, some are almost a paragraph long, to be followed by a short one. The short one is smartly inserted to emphasise the meaning or the intention. Or to challenge the reader’s mind!

Night Side of Dark is an exciting read that keeps the reader entertained and on the edge, but if the reader slows his/hers reading, there is yet another aspect of this fine prose: it is well written, logical even when it looks that it is going into illogical direction; it is graced with intelligent conversation and observations. He keeps you alert; you’ll stay focused well into small hours.

Caleb has authored a number of books and judging by the two that I have read so far; it is worth investing time in his writings. He won’t leave you disappointed, but quite the contrary: after the adventure ends one feels as if he has seen it first hand, as if he was a part of the amazing story that came from Caleb’s intelligent and engaging mind. 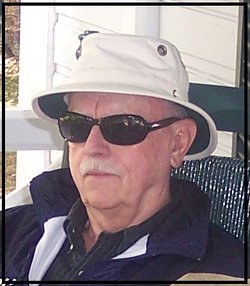 Caleb Pirtle III is a prolific novelist who has written 65 novels decorating and mastering his worthy art with great skill and patience. His art is a result of honing it for many years, and it sharpens the reader’s mind as well. The testaments to his success are not just numerous novels but also a number of awards obtained over years as a novelist and journalist.

Apart from writing novels Caleb has written teleplays for the US network television. He is the founder of Venture Galleries, a literary blog that connects writers and readers, where he has gathered a rather high number of recognised and successful names in the literary field.