Joshua and Sam are best friends and they have a unique problem that is often germane to kids in High School.

Handling the situation is what makes it so unique as these two academically good students, well behaved, respectful and resource students have to turn the tide, buck up and decide how to deal with coming face to face with bullies within their school environment and community. What happens when two kids decide it is time to turn the tide on those doing the deeds to hurt them? What happens when things go too far and get out of hand? The Bully List by Michael Embry will bring these and many other issues and situations to light.

Going to school by bike and parking it safely should not be a problem except if you are Sam or Joshua. Hunter and his two friends Earl and Freddie have it in you might say for them but no one knows why. Harassing them in the lunchroom, locker room and even sideswiping them on their bikes on the way home are just some of the cruel and dangerous things that these three have inflicted on both Sam and Joshua. But, when Joshua and Sam leave their bikes outside of Sam’s house and find them stolen their fuses are about to blow and things are going to come to a definite boil. 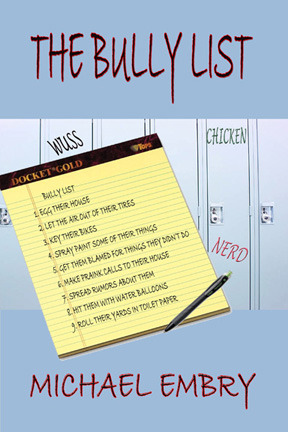 Trying to handle the situations on their own and keeping parents out of the loop for the most part worked until things got dangerous. Stolen bikes, both of their houses egged and vandals robbing houses in the community leads Sam and Joshua down a dangerous path when the decide it is time to turn the tide on the bullies and give them a huge taste of their own medicine. But, is retaliation right? What about getting some help from the school? When Joshua is attacked by Earl and stands up for himself why does Mr. Bishop take Earl’s side and give him a week of detention. Explanations are clear and the evidence is right in front of him until something happens and the sides even out.

Scoping out the neighborhood of Hunter the one that seems to run this group of bullies, Joshua notices three cars in the driveway and waited to see who was behind the wheel. The red car seemed to be driven by the person in charge and the end result was he decided to go home before someone seems him. Joshua is determined to find out more and he observes who is stealing and breaking into houses and learns from his friends at lunch that he and Sam were not the only ones whose bikes were stolen. Learning that there has been a rash of thefts in the community it might be time to alert the police and their parents. But, you know kids and when things get heated they often go off on their own disregarding the end result.

When Joshua reveals to Sam what he has observed and who is responsible for stealing the bikes and robbing houses instead of telling the police and their parents they pressed on with their own investigation. But, things changed and Joshua had to find a way to inform the police and what he decides to do and the help he receives will show readers, teens and even parents to what lengths a teen or kid will go to in order to do the right thing even though they are going about it not in not exactly the right way. When things get really dangerous we learn more about Hunter and his family life and his friendship with a girl named Mary Jo. When Joshua and Mary Jo are seen together Hunter’s fuse pops and explodes the end result should give Joshua pause for thought to rethink his strategy against him. But, things change, the situations are reversed and he and Sam create what they call their own Bully List or you might say get even list and what they do to Earl and Freddie, although wrong is quite hilarious.

These boys are dangerous and even attacked his dad when he was in the garage and then vandalized his mother’s car and broke into his house. But, when things get really out of hand and pranks are played someone gets severely injured, explosions occur and the police need to take a stronger stand. Although the school has a no-tolerance for violence rule and Hunter and his friends have been warned, they don’t seem to take anything seriously and their actions will speak much louder than their threats.

Joshua and Sam protect each other and when Sam is attacked Joshua proves that he can take on just about anyone and won’t stand for their actions anymore. But, brave is one thing and dangerous situations are another as the violence escalates, parents become involved and a situation at Sam’s house could becomes so dangerous someone could wind up more than just hurt. Guns, robberies, and gang members trying to recruit Hunter and his friends and cavalier attitudes from a young man angry at the world because of something he is harboring inside and can’t release.

An incident in the school that sent many to the hospital put the school on the news and makes the violence and bullying front and center in this community. But, the ending will surprise you and the final outcome I hope will teach teens just how dangerous it is to not report things when they happen. Bullies are people that find pleasure in picking on those that are weaker, smaller and not able to stand up for themselves. Watch what happens when Joshua takes them on and along with Sam decides that taking things into their own hands requires more than just pranks but the help of adults, the school, the police and teachers. Bully List is a strong reminder that many kids face these situations on a daily basis and schools need to be more vigilant in protecting their students.

Peer Mediation programs, tolerance programs and character education programs are just some of the ways to help filter out the angry and teach kids how to cope with difficult situations. Should Sam and Joshua have done what they did? You decide! When should they have told their parents? What would you do if you were faced with Hunter, Earl and Freddie? Would you create a Bully List or is there another list that might work better? This is a must read for students of every age, teachers, guidance counselors, study groups, church groups and character education discussions.