There is nothing as boring as a hot summer’s day with nothing to do but sit under a tree and complain about the heat. Sweltering, the air so still, the wind calm and the sun blazing hot making everyone tired, bored and looking for something else to pass the time of day Joey, Danny and Jacqui needed to do something else to keep cool. 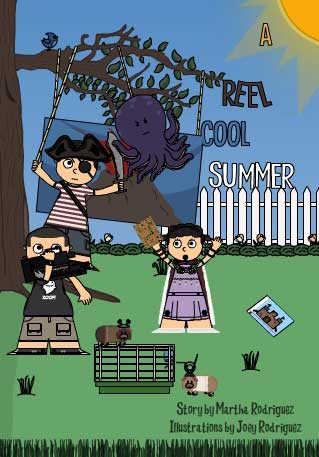 So, why wouldn’t they want to go shopping in with their mom to get out of the heat? Who wouldn’t want to have fun buying clothes, trying them on and enjoying the mall? Definitely not Danny and Joey. Their sister Jacqui thinks that cool but they definitely disagree. So, what will three energetic and imaginative kids going to do to keep out of trouble and have some fun on a really hot day?

You won’t believe what they come up with and the solution to their boredom. Imagine sitting under a tree on a hot day having to read a book during summer vacation so your brain does not turn to mush. Sound familiar! Solution: Mom should buy them a pool. Wouldn’t that be nice!

But, since that was not going to happen at least in the near or distant future they would have to come up with some other way to beat the heat, stay cool and have some real fun.

Danny is the middle child and has a unique way of expressing himself. Comparing the heat to the intensity of the lava that spews from a volcano really helped turn up the boiling index and even makes the reader want to jump into a cold shower before finishing the book. When mom says she will have to think or see about getting them a pool they are definitely disappointed.

But, when Joey receives a postcard from the Public Library, the entire direction of their day changes, and the wheels are set in motion for a hilarious escapade into the movie-making industry. So, what did the postcard say? They are having a Movie Contest at the Public Library.

The deadline was 5 P.M. that day and our three potential actors and movie stars would stop at nothing to create what I think was a really funny and cute movie in order to meet the deadline.

Starting with an old video camera, some VHS tapes, unusual props, their dad’s help with the background, cute little animals as aliens, a list of cool stuff, three creative kids and you have the makings of a really cute movie. Just what do they come up with?

Imagine a pirate eating broccoli and loving it! Imagine a princess who loses her crown and has to hope the aliens will give it back! Imagine sending them to Planet Homework if they don’t return it! Working together as a team, getting all of the scenes done, they bring the film to the library just in time.

What happens when they arrive at the library and present their film will definitely surprise the reader. First prize is one hundred dollars and to kids that almost like a million. Second prize is a trip to Adventure World and the third prize is a mystery gift.  Working together, creating the film, using the wildest props and creating a story that is zany, hilarious and definitely will keep the reader on his/her toes to keep up with the plot of the movie and the energy of these three great kids.

Easy to follow dialogue. Vocabulary that is geared to students in grades two and three replete with adjectives, verbs and colorful language; author Martha Rodriguez has really hit the target in creating an outstanding book for young readers. Illustrations that are lifelike.

Characters that come alive whose expressions are priceless and who will definitely make you smile and wonder will happen next, these three smart and enterprising kids delve into the field of movie making and create what they think is an Academy Award-winning movie. But, our director, filmmaker, and scriptwriter Joey and his two siblings will endear themselves to you and make you forget that is a hotter that than lava day outside. You might even feel cool

The book is beautifully illustrated by Joey Rodriguez, which makes the story come alive. Using dark blue and purple as the background colors for many of the pages helped to make the characters stand out, cool off the page with the blue ocean water and really set this book apart from the rest. The vivid imagination of the children using ordinary things they have at home only proves that you do not need to spend tons of money to have fun and create something lasting and special. This movie will be a great remembrance for them to view when they get older.

Even though this is a picture book the higher-level vocabulary and storyline would gear to readers in grades two and three.  As an educator I would definitely see this book in school and classroom libraries and as a great read-aloud using it to predict outcomes or draw conclusions as the children create their movie and hope to get it in on time. This book teaches cooperation, working together and having fun as a family.

Just what happens and who wins you have to find out for yourself. What is third prize? You won’t believe it even if I told you. So, read this great book to your class, children at home or just by yourself to make you smile, and find out what the COOL in the title turn out to be.

One real cool book. Three real cool kids. One great new author. You definitely have the start of a series using these three kids and their wild imaginations. You just have to love Danny. He is truly an original.

THIS BOOK GETS FIVE COLD ICE PACKS TO KEEP THE HEAT AWAY.