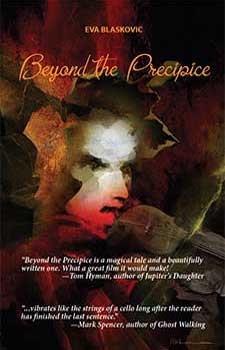 Trapped by the wishes of his dead father and his brother’s blackmail, Bret Killeen suppresses his musical talent for years—until he meets Nicole, a university cello player with big dreams.
As Bret wrestles with unresolved grief and guilt over his father’s death, Nicole stirs his passion for music until it can no longer be ignored. Her supportive father provides a striking contrast to Bret’s own family, an enlightening that drives him to the breaking point.
As the threshold of adulthood, Bret must resolve his past in order to seize his future. The truth his mother needs to know, the power his brother holds over him, and the man their father really was are the sources Bret must tap to earn his freedom. [more]

I loved this book! I was immediately drawn into the story of Bret, a University student struggling with a life he thought he should live, and one he is destined for.

Eva describes in heart wrenching, honest detail, the emotional challenges that this young man must go through as he finds his right place in this world. He learns to love and understand himself with the help of some amazing people who have come into his life when he least expects it.

This is a story that all young people should read and a few of us older adults as well that have also lived a turbulent life and survived to be happy.
— Sherry Maslyk

Honest, moving and compelling, this book will appeal to the young adult and the older one, too. I’ve had the privilege of reading the author’s short stories and loved them, so I was looking forward to her debut novel. I wasn’t disappointed.

Blaskovic has an ability to weave heart and soul into the words she writes, pulling the reader with her every step of the way. This is a wonderful book from a talented writer. Highly recommended.
— Louise Harnby

Bret slept.
On the acreage, they watched the summer storm come in, a charcoal cloud smoking out the sun as lightning began to flash. Wind rushed through the leaves with the sound of a rain stick, and continued across the yard, bending young trees to the horizontal. Rain followed, crashing like a breaking wave.
He ran into the yard, his bare feet squishing in the flooded grass, his shirt stuck to his back. He peeled it above his head and let the wind rip it from his hands. Warm water closed over his arches, brown with mud coaxed from the grass, as he lifted his face to the sky and let rain drum over his tanned body. Water, emblazoned by lightning, fell in a torrent, and thunder reverberated in the trees.
“Get in here before you get killed!” Kern yelled from the door.
“It’s writing my song!”
“You’re crazy!”
He raised his arms to the wind, let it rush at him and around him, feeling its living power.
Nature was writing the song for him. All he had to do was listen. In the thunder: the electric drums. In the breeze: the woodwind harmony. In the rain: a piano melody. Then electric guitar and synthesizer, rain stick and his own voice—pressurized, building into an explosion of instrumental release; pellets of hail crashing into his body, the forces of nature thrashing about before peaceably fading, until only stray raindrops splashed from his skin.

Streamers of a setting sun subdued the trees into silence, diffuse in the misted air. In the west, where the clouds were breaking, shafts of sun attached to the ground, while in the blue-black east, a rainbow glowed, arching over a sea of green. Small birds flitted about amongst the trees.

He spun around in a circle. Everywhere he set his eyes, there was music—strings of notes binding together in harmonic dance. Guitar gliding down shafts of sunlight, the piccolo of birds’ flapping wings, bagpipes following the roll of the hills, flutes swaying with the grasses. His running footsteps were the drums; the bass, the throbbing of his heart. Piano dripped amidst the harmony of a strengthening rainbow. And, finally, an organ rushed in, a cresting wave breaking over a shore of grass.

It was Earth, and yet it wasn’t. He lay back and submitted to the dampness of the ground until the sun restored warmth to his body. A small cloud cruised overhead: a ship. It was the first thought that entered his mind.

Starfighter was landing.
He blinked in the hesitant daylight, the ceiling of his room coming clear, and sat up.

“That’s it,” he whispered.
Outside, the blue-tinged clouds warned of coming snow. He turned away, for it did not matter. He would not be going into school that day.
He had work to do. 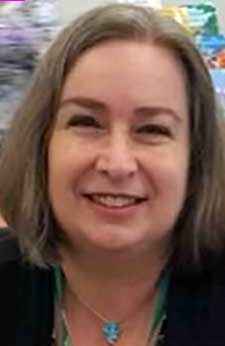 Eva Blaskovic is a writer, editor, and educator. She was born in the Czech Republic, grew up in the the Great Lakes region of Ontario, Canada, and moved to Alberta in 1988, where she raised four children.

Blaskovic teaches literacy, writing, math, and science. She also mentors young authors. She has written non-fiction articles on business, education, parenting, and travel, and is also an author of short fiction.

Blaskovic has played eight musical instruments. She has worked in science labs, spent many years immersed in karate and taekwondo, and was an avid canoeist in her youth.

Beyond the Precipice is considered “high Canadian” and has been accorded exceptional critical acclaim from literary experts the world over, who have marvelled at the novel’s complexity and magnetism. [more]