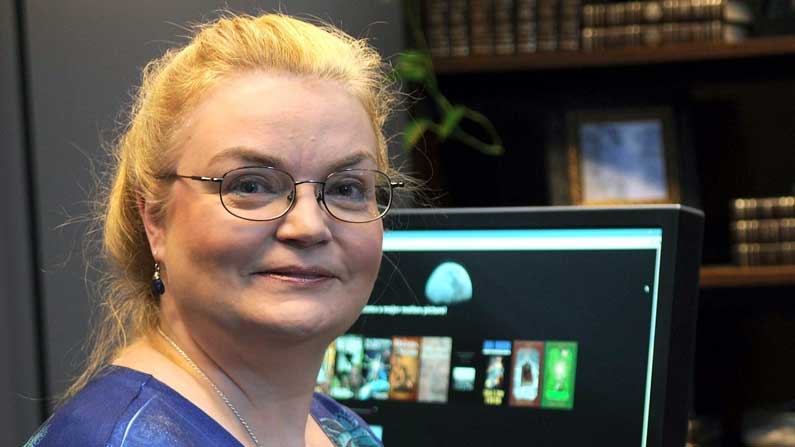 The Interstellar Woman of Mystery is a writer, editor, and former rocket scientist currently residing in Huntsville, AL. With a keen interest in Holmesiana and matters mysterious, she authors finely-crafted science fiction mysteries.

Tell us something about your background.

Well, I’m from just outside Clarksville TN originally. Ever heard the song, Take the Last Train to Clarksville? Written about my hometown. I have graduate and undergraduate degrees in astronomy, physics, chemistry, and mathematics, as well as an undergrad minor and graduate subspecialty in geology.

I have a ministry license, am an NWS-certified storm spotter, have been a duly sworn peace officer, an ACE certified personal trainer, a tutor; I used to teach at the US Space Camp…and I left the space program a few years after I lost a friend in the Columbia disaster.

My first book, Burnout: The mystery of Space Shuttle STS-281, which was in the hands of my writing mentor at the time of the disaster, eerily predicted the details and said mentor had to talk me out of trashing the manuscript.

I grew up in the country, and both sets of grandparents had farms. I was used to lots of open space, and star-spangled night skies. Now I live in Huntsville AL and I don’t get to see much of the night sky anymore. I miss it. But my imagination fills in.

My new book, Sherlock Holmes and the Mummy’s Curse, is a YA-suitable science-fiction mystery in the new Gentleman Aegis series starring Sherlock Holmes — but he’s not necessarily exactly Doyle’s version of Holmes. This is an alternate reality, loosely based on the concepts of my Displaced Detective series (Holmes brought from an alternate continuum to the modern-day).

It’s more or less the same Holmes as my other series, but as a young man, before he is forcibly moved to another universe. He and Watson are only just settling into their respective professions in London, with all the adventures, follies, and foibles to be expected of young men in that locale and era.

I wrote it in a style befitting Victorian England, including grammar and spelling, though I did not even attempt to mimic Doyle’s style. What I hope is that readers will be left exhilarated, as if they have had a wonderful romp through history with Holmes and Watson. And I have every confidence that I will manage to completely surprise readers with the ending!

It turns out that the co-publisher/editor-in-chief of Pro Se was a fan of the Displaced Detective, and he approached and contracted me to do a “prequel” series for his house. I checked with Twilight Times and they had no objections, so off I went!

My goal is to make my reader believe my characters are real people, in real situations. A couple of years ago, I actually had a fan email me to ask if Holmes was related to, and if he’d been upset by, the perpetrator of that Colorado movie theater shooting incident — the perp’s surname was Holmes, you see. And the fan kind of brought up short at one point when she remembered that she was asking after a fictional character.

So I think I am succeeding, for the most part.

Were you influenced by a particular person, artist, or genre?

Oh, heavens. I hardly remember a time when I wasn’t writing. I was writing poetry in early elementary school; in 4th grade, I composed a play — horribly derivative, in retrospect. But the teacher seemed to think it was good enough to allow me to produce for the class, who seemed to enjoy it. By middle school, I was writing short stories. But it wasn’t for many years that I had any inkling there were entire BOOKS inside me.

I had numerous author inspirations across multiple genres — Asimov, Doyle, Bradbury, Alcott, Montgomery, and more. But my favorite genres were science fiction and mystery, and when it came time to write my own stories, a blend of the two seemed logical, as to my way of thinking, every good science fiction story has a mystery, a weird twist, a gotcha! at the end. I also tend to throw in some other genre elements for good measure, like romance and thriller, just to make things exciting.

Stephanie Osborn- Oh, I think it would depend on which of my books you were considering. The Holmes stuff has been favorably compared to Doyle, even though I made no attempt to mimic Doyle’s style. But because I tend to either use all British English or use it whenever the character speaking or thinking is British, it evokes the same feel, I think. But some of my other stuff, the space stuff, has been compared to Robert Heinlein and E.E. “Doc” Smith.

Thank you very much for having me!