Ralph L. Angelo Jr’s The Cagliostro Chronicles – a sci-fi action/adventure/space opera novel set in the not too distant future. Ralph L. Angelo Jr.- I’m from Long Island, NY. My writing background has been magazine articles for major motorcycle magazines over the past decade plus. from there I wrote a book called “Help! They’re all out to get me! The Motorcycists guide to surviving the everyday world” Which was an instructional book for both new and returning motorcyclists. After that I began writing my first novel “Redemption of the Sorcerer. The Crystalon Saga, Book One” Since then I’ve written several novels including “Torahg the Warrior: Sword of Vengeance” which is a sword and sorcery novel set in a prehistoric time, and after that I wrote my current novel, which we are here to discuss today, “The Cagliostro Chronicles” A sci-fi action/adventure/space opera novel set in the not too distant future.

Ralph L. Angelo Jr.-I want them to be entertained, that’s the most important thing. “The Cagliostro Chronicles” is about man stepping beyond his boundaries and for the first time into a much bigger, darker universe, one where he is not accepted with open arms.

Ralph L. Angelo Jr.- I’ve always read a lot of ‘pulp’ genre books. Books like ‘Doc Savage’ and as I was growing up, books like ‘The Destroyer’ as well as a lot of fantasy and sci-fi. I also read a ton of comic books over the years. I wanted to write from a very young age. In fact the opening scene in this novel I wrote over twenty years ago and just held it for when I could use it. The same for the opening scene in ‘Torahg the Warrior’ which is a very powerful and dark opening scene.

Ralph L. Angelo Jr.- Well, I’d compare it really to works like books in the Star Wars or Star Trek expanded universes. It’s NOT hard sci-fi, that stuff tends to bore me, it’s action/adventure set in a futuristic/sci-fi setting. There’s lots of pulp style action, and it’s at a fast pace. Basically, and I’m sure this is true with all writers, I write books that I would enjoy reading. 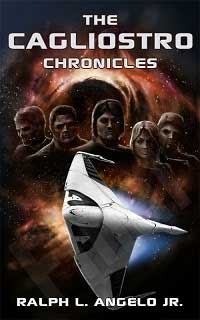 Ralph L. Angelo Jr.- What inspired me to write ‘The Cagliostro Chronicles’ is simply what sci-fi writers have been wondering for literally centuries, what’s out there? Jules Verne wrote ‘From the earth to the moon’ in 1865. Many authors love to postulate on what exists beyond our comfortable space. 70 years from now, when this book takes place, that comfortable space is much larger, but it’s still only to the end of our solar system. It takes years to get between planets, and military crews travel on mile long ships that are basically floating cities in space. Heavily armed and armored they patrol the depths of our solar system, but none have gone beyond. Along comes Mark Johnson, genius inventor/engineer/scientist and CEO of his own aerospace company. He discovers how to break the light speed barrier, and once he does, THAT’S where the adventure truly begins. Remember the old ‘X-Files’ Adage, ‘The truth is out there’? In this case it really is, and so is a vast interstellar conspiracy to keep earth men within their own solar system, the question is why?

Paul, thank you so much for allowing me to do this interview it was a pleasure, and I appreciate the opportunity to speak to your fans. Good Luck and take care!