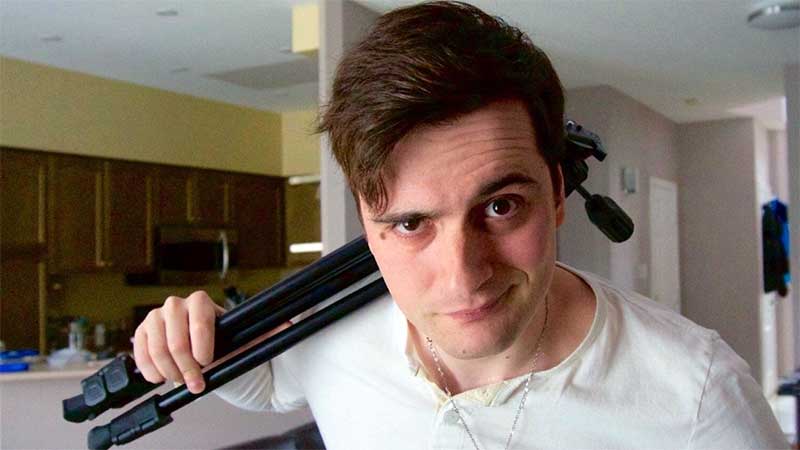 Matthew Tyler Di Leo is a singer/songwriter, YouTuber, freelance journalist, and voice actor. With over 10 years in both the music and media industry, Matthew is the creator of the independent web series; Always Right Reviews.

When not working on creative projects, Matthew likes to give presentations at various conventions about media theory, growing your brand in a digital world as well as making appearances on podcasts.

Tell us about your background. Who you are? Where are the members of the band from?

I was born in Burlington, Ontario, my father is a computer programmer and my mother jumped around jobs. They divorced when I was two and my mom took me out to Vancouver, British Columbia. I have spent my life flying back and forth between both parents living two separate lifestyles in the process.

I started music when I was in college in 2009 and haven’t looked back since. Shortly after that, I created the brand/alter ego SonicMTD as a means of separating my personal and private life. (Pictures like Elton John, Sting, or a stage name used by a professional wrestler.) My current band is called Worst Case Scenario GTA. My bandmates are from within the GTA (I’m the oddball in Mississauga).

A lot of my subject matter is a sign of what is currently going on with me at this time. At the time of this writing, I’ve gone through harsh breakups both romantically and professionally which has affected how I view the world.

What prompted any of you to be a musician. Did you have any specific inspirations in mind? Were any of you influenced by a certain person, artist, or genre?

I never intended to become a musician. As a result of my childhood, I spent the vast majority of my life following my parent’s schedules. If they moved, I moved with them. It wasn’t until college that I was able to craft my own identity. If I had to list what made me go down this path it would probably be the following 3 things:

Oasis: I was in a Future Shop near Pacific Centre Mall in Vancouver British Columbia when Champagne Supernova blared on the speakers. I looked up much like a chicken staring at the rain. Quickly enamored with their sound, I fell into Britpop hard. My early look and sound were essentially ripping off Liam Gallaghers image and signature vocal style. It got bad cause for a few months I spoke and sang in a Mancunian accent.

Beck (Mongolian chop squad): Whereas Oasis founded my interest in music and GH2 made me want to write my own music, Beck drove me to perform live shows and push myself out of my comfort zone. Dare I say, it also helped me create a signature style that included the utilization of Japanese Rock. When Much Music decided to air an anime in the mid-2000’s it wound up influencing a fair amount of future musicians. As a high schooler, I saw similar qualities in the lead character Yukio “Koyuki” that resonated with me.

Being disheartened and having no aim or direction in life but through music being able to come out of your shell and escape from a mundane existence; had me hooked.

If I were to include an extra one I would also throw in Edgar Wright’s “Scott Pilgrim Vs. The World” as well. Great film.

I get compared to a lot of musicians. In my previous bands (Searching For Kim, City In Wires) I was compared to Oasis, Green Day, Weezer, and Placebo. It makes sense since I was listening to those bands a lot at the time.

I answered that in the above. Usually, it’s what is going on in my life. Sometimes it can be a film or video game or anime. A lot of the time you can get inspiration from nothing. Yep… moving on.

Where can listeners obtain a copy of your music for them to enjoy? How can they contact you with any thoughts or questions? And do you have a means by which they can “sign up” to be notified when you make more music?

So my current band (Worst-Case Scenario GTA) might have to change their name so social media for them is quite sticky. I recorded our debut show and uploaded it to my YouTube channel.