Dutch multidisciplinary artist Lin de Mol studied sculpture at the Gerrit Rietveld Academy, and film and video at the Rijksacademy in Amsterdam.

She completed her studies in film- and computer techniques in Dublin and New York. Her work covers an array of media. Video installations, projects in public spaces, photography, short films, and drawings, to name a few. 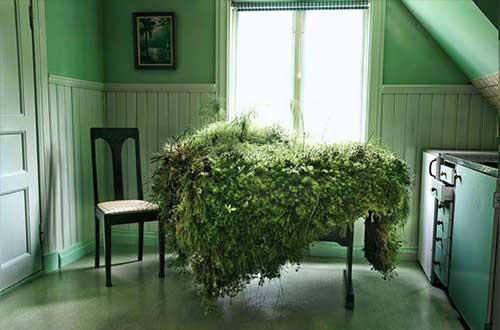 What got you into art, and what do you enjoy most about it?
It was ´Cathedra,´ Barnett Newman’s large blue painting that got me into art. I was a young girl when I first visited The Stedelijk Museum in Amsterdam. Wandering from one white space to another, I halted in front of this enormous piece. I had no previous experience or knowledge of modern art so I wondered why anybody would paint just a big blue field with some white lines on it.

I sat down in front of it, on a small bench and tried to figure it out. I peered into the blue. After a while, the intense color started to vibrate in the corners of my eyes and I felt as if I was being lifted off the bench. In front of me a sublime blue space opened up. It was endlessly deep and constantly shifting in tone. It moved, and was alive.

It seemed as though next, I would dissolve into it, but that didn´t happen. It stopped. I could go no further because something was holding me back. I looked at my shoulders and saw that I had hit the two white lines on either side. I was bobbing up against them like a moored sailing boat at the waterfront. “I get this,” I thought. “I know why this Barnett Newman guy doesn’t let me float on. He lifts me up, out of myself, to see a greater space, a higher reality. But he doesn’t want me lose myself in it. He wants me to think about it. Reflect on it. Stay awake!”

It was a mind-blowing experience. Barnet Newman’s metaphysical piece showed me what art is capable of, and when I walked out of the museum, I knew what I wanted to do with my life.

What I enjoy most about making art is the clarity it can bring to the nature of things. About the world, about life. Within every piece, there is a hidden logic, a natural, unwritten rule that applies to all things, and I set about looking for it, without any prior knowledge. It’s like walking into a dark room; I know there is a door somewhere that leads to the next room, which is the next piece. It’s a room that is unknown to me, and I want to know what’s in it. And then in the next room and the next and the next.

Logic may dictate that making art is probably the least ´useful´ thing to do in the world, but it is the one thing that makes the most sense to me. It´s very paradoxical. 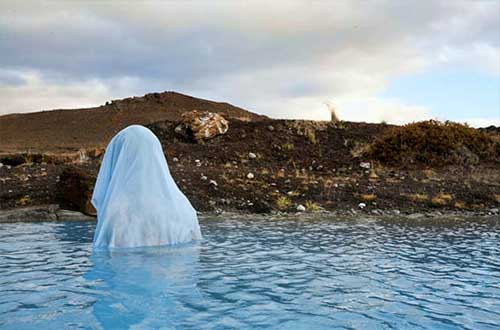 Which artist influenced you the most?
When I was a sculpture student at art school, I was influenced by ´titans´ like Bruce Nauman and Louise Bourgeois. But also by more ´cult´ artists like Mereth Oppenheim and Maya Deren, whose playfulness and sense of magic I´ve always admired. Later when I switched to film and photography, I was moved by photographers like Sally Mann and Francesca Woodman, and filmmakers like Jane Campion and Julio Medem. But also a writer like Haruki Murakami has had a major impact on my thinking.

But in these times I must say we are exposed to such an enormous flow of imagery and information, through social media and the internet, that it all comes and goes very quickly. In a certain sense, I am influenced by many artists, and it can change on a daily basis.

Even though these influences don’t show up visually in my work, it does give me an all-over notion of being part of an enormously diverse forest, and that all contributions, mine included, enrich this forest. I think that is a beautiful idea. It abandons the notion of a single red ´High Art´ line running through history. Those days are over, and we now have to learn to deal with this new type of diversity and the freedom that arises from it.

What makes a piece of art great?
For me, a piece is good when it ´buzzes´ like an energy field. It sounds like a humming bee. Other than that it cannot be explained. You just know.

How do you balance your schedules and artistic goals with everyday life?
Balancing art and life is a daily challenge. Generally speaking, art balances very well with silence, solitude and nature. Those are things that tend to clash with motherhood, housework, and finances. Because I do combine my work with a ´sort of´ ordinary life, only strict planning brings me satisfying days, where I feel I get work done, spend some quality time with my daughter and keep the life running. It takes a lot of discipline to pull that off every day. Being an artist implies a way of life outside of regulated structures. It’s a path where only you define the values. This total freedom has a price: you are entirely alone in your choices. It’s a quite uncompromising path to take.

What do you aim to evoke in the viewers of your work?
To feel. I want to evoke a feeling before any thought can enter. And then I hope this emotion makes you think about something in your life. A reminder of a longing, often long lost. This underlying melancholy is typical for my work, regardless of the medium I use. It comforts me to recognize myself in a piece of art. It’s a humanity we share: a capacity for compassion.

An artist is in love with the beauty of the world. If it’s a great artist he/she will be able to instill this love into the work. And it’s the love that will move the viewer. In that one moment, we are not alone. We can recognize ourselves in any other human being or living creature. 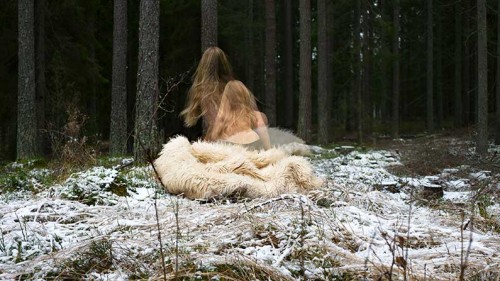 Please tell us about your latest work, and what inspired you?
My latest work, ComfortZone, was triggered by the most tragic event in my life so far. My brother died two weeks before my emigration with my family to the far North. When winter came, I made this piece to create a place for myself and my grief in my new surroundings, My ComfortZone.

In this work, I wanted to move these feelings towards a more transparent state. So I decided to do a double exposure. I work alone in the landscape with a self-timer that only gives me 10 seconds to move into position. I needed to get the two opposite movements into one motion: the falling and the rising. That was quite a challenge. But to me the limitation of a medium is imperative. It keeps me from being in complete control, and in that zone the magic can happen.

Can you tell us about how you got your latest work exposed?
I usually send all my new work to my gallerist, and he takes it from there. Maybe that sounds a little lazy, but he is a very enthusiastic man with a lot of heart for his artists, so I trust him completely with it.

My latest works took part in the Photo Fair in Milan, and they will also be part of my next solo exhibition in Amsterdam. As a result of the Milan fair, I was invited to contribute to a large group show in Turin, Italy, later this year. My work will also feature in ‘AutoPortrait,’ a book on contemporary photography by the art critic and philosopher Giorgio Bonomi.