Jo Linsdell is an award winning, international best-selling author and illustrator, as well as a recognized marketing expert. A Paul Collins interview.

Tell us about your background. Who you are, where you are from?
I’m originally from the UK but moved to Rome, Italy back in 2001 after coming here for just three days and staying. It was both the craziest and the best thing I think I’ve ever done. I’m now married to a wonderful Italian man, and together we have two little boys who give me a never-ending supply of inspiration for my children’s books. I also write non-fiction. All but one of my books have been Amazon best sellers, including the books I have illustrated for other authors (I also work for hire as an illustrator). When I’m not busy writing and illustrating, I’m CEO of Writers and Authors and organize the annual online event, Promo Day.

What themes does your book explore and what do you hope the readers will take away from the experience? Is there a particular feeling or experience that you hope to evoke in the reader?
In my latest book, How to be Twittertastic, I aim to explain Twitter to writers and authors and show them how to leverage their efforts on the site. Twitter is a social media powerhouse but also one of the most misunderstood social networking sites. Its bite-size content is perfect for busy writers. I hope readers will come away with a clearer idea of what they can do on Twitter and how they can do it.

With social media, I’ve been able to build an international fan base that I otherwise wasn’t likely to develop. Social media helps bump sales and it’s accessible to everyone. Most writers know they should be using social media as a marketing tool but many don’t know how. With How to be Twittertastic, and the other books in the Writers and Authors Guide to Social Media Series, my goal is to make social media simple and offer ideas and examples of how to get the most of it without taking away too much time from writing.

What prompted you to be an author and did you have a particular inspiration in mind? Did an individual person, artist, or genre influence you? 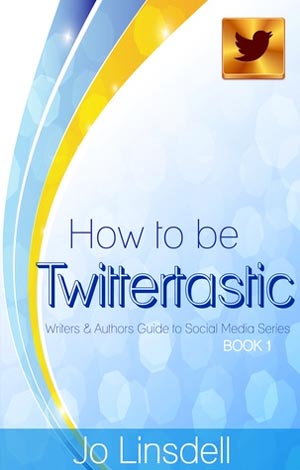 I’ve always enjoyed writing right from an early age. Creative writing tasks at school were one of my favourite activities. In my teens, I used to write poetry as a way of venting my feelings. Later on, I fell into jobs where writing was part of my role. I worked for a company that produced publications for the dental industry and learnt a lot about the publishing process. Then I worked in the Neurology Department of Rome’s main hospital where I helped write research articles. I hadn’t really planned it. Writing chose me.

The big turning point for me was back in 2006 when I sent off my first freelance article to an English language newspaper in Florence. They published it in the next edition and asked for more. This was when I realized I could be a writer writing about what interested me and officially marked the start of my writing career. My first book was Italian for Tourists, an English-Italian phrasebook, but since then I’ve published various genres. I’m most known now for my children’s books and marketing books.

If you could compare your book to any other existing works, which ones would it be, and why?
There is a vast number of books out available now about online marketing and social media. As How to be Twittertastic is designed specifically for writers and authors, I would say books like Twitter for Writers by Rayne Hall or Twitter for Authors by Beth Barany.

Tell us about your latest work and what inspired you.
I’m currently busy writing How to be Pinterest Perfect, the second book in the Writers and Authors Guide to Social Media Series. I’ll be covering each of the main social media sites in this series but decided to do Pinterest now because 1) I’m addicted to Pinterest, and 2) social media in general is becoming more and more visual. The success of Pinterest since its launch has prompted the other social media sites to redesign giving more space for visual content. Bigger banner headers, bigger profile avatars, more space on the newsfeeds… visual content is BIG news.

Thanks for taking the time to do this interview. All the best!
Thanks for having me 🙂