We have Linda Scott, a recent, first time published Indie YA author and book seller with us. I was involved in editing Voyage of The Legacy, a science fiction book, the first in a series. Linda’s world is intrically woven and the first book serves as the launch into her world. Welcome, Linda ~

What inspired you to write?

The need to tell a story and the need to let my creativity out. I am an artist and I must create or explode. Art comes out in so many ways: plants, animals, drawing, creating anything including cooking.

As an artist my art flows in many ways. When young, I drew abstract art of flames and lines, to know where eyes that do not see, see everything. When I got older, it came out in the jewelry I created and in stones I cut; then, in the work I did caring for others. Art comes out of an artist in every form; whatever the uniform worn, it is drawn to the type of work they do, into the way they live their life. Life is that canvas. 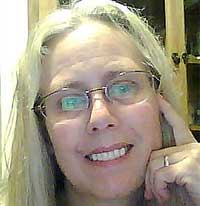 Do you have anyone you show manuscripts to and get advice from or are you a loner doing it all yourself?

I wished I did but no one could or would stay with it. My sister was a great hope, but her mind is too far gone in her own fantasies to help; she, too, is an artist and we had the same background. I am a survivor and the only one to succed in my family intact with sanity. (maybe) My childhood was what nightmares are made from. In my life, I have walked in many shoes.

I have had many people read parts of my novel but only Lee, my husband of many years, has read it all. He says he likes it, but it really is not his cup of tea. And now, you have edited it and I have in hand the finished copy.

What genre do you normally write in? Also, is there a genre you’ve always wanted to write in, but don’t feel you could pull it off?

I want to write to a young adult audience. I feel it is important to write choosing good words and story scenes with purpose. I am a caregiver by trade, and when I choose a book to read to a sick friend I feel safe choosing YA. Anyone can write words and tell stories for adults but to tell a story for youth to understand and learn from, takes skill.

Do you ever base your characters on people you know?

I base my characters on everything I see, every person I meet. All of the animals I have had, find their way into my book. As a character comes to life I feel who is there and form the character’s personality. Willow the second most powerful clone in my book, Voyage of the Legacy, was based on Muphy, a cat I had for 24 years. My brother, name and all is in my book, Norman E Durkee. I gave him the life he would have wanted; at age forty-four. he committed suicide ending, what I thought, was a good life.

What advice would you give to someone who was just starting off in writing?

Put the words to paper and tell your story, the work begins when it’s time to re-read and edit your work. I have found such a release in writing … but my first copy does not resemble my current story at all. My first writing was dark and scary. My first read told me I needed to look at my story and lift it to a new level. By my third re-write my story took on a clean fresh look. Now in my seventh edit, it is a good story of life, freedom, joy, fun, and love.

Do your stories tend to have morals, or special messages, included within them?

Yes, my stories do have moralistic messages.They arel about life lessons and challenges. I have walked some very hard roads in my life, and this is a good way to give back, teaching some of the things I have learned.

This question was posed by a fellow author and I loved it so much I decided to throw it into the mix ~ Oh no! One of your characters has escaped. Luckily, I have caught them! I will interrogate them with the help of a lie detector. Welcome! Take a seat, make yourself comfortable. You will be returning to your book once this is over. What’s your name, where are you from and what is your role in the book?

Ruud Farms is the name and I run the bio-garden on the Legacy … lost my wife five years back and I just want to grow things … I have a talent for growing things … I am rated a ten on Earth’s talent scale … I can read minds and mind speak; I can teleport my body to other places … I took this mission to get away from Earth – I do not plan to ever go back … my name comes from a nurse the author worked with, but my appearance and feel is of Jack V. Kirby, the author’s stepfather … a big man, always had a smile on his face and a song on his lips … he laughed and cried if things were sad … he enforced what life was and would bring good and bad … in the story I marry Cora the oldest clone and we give of ourselves to form a integrated family … in the book, I am grandfather to everyone.

Tell us why we would enjoy reading your books?

I have created a wonderful new world in a brand new star system. I have brave new adventures and creatures no one has ever seen before. Want to ride a dragon? How about meet a SiiCor and help make SiiSilk? Want to get to know a sentient rat? How about ride a pug in a duck-n-pug-run, YEHaw!

Voyage of the Legacy is the first novel of 5 in the Gifts of Dawn Books series and a word from Linda:

The Gifts of Dawn Book 2
Rovers of Eden
By Linda A. Scott

Gregor fought with all his might against the Anthorians, an ape like race, that inhabited the planet Doran. He was totally astonished when wingless fighters appeared in the cave close by where he was fighting. Nothing could stand in their way. They had strange weapons that shot out a red light and exploded whatever they hit. Turning his attentions back to the battle, Gregor saw Heron, his heartbond fall, her neck broken, laying at an odd angle, in a pile of bodies. The stab to his heart enraged his body to fight even wilder. The cave was in utter confusion. The fighting was fierce. The Anthorian’s brain-damaged dragons were breathing fire into the cave openings. The carnage was everywhere. He knew the end of his people was near, so many dead, so many dying. The children – what will happen to our children?

Gregor felt a blow to his head as blackness over took him. As his senses came back to him, he shook his head to free his face from the hair that had fallen over his eyes. He must get up and fight. He was a sitting duck on the floor like this. Where was his sword, there in the back of an Anthorian? He ran and jumped on the creature pulling his sword free as he swung it yet another of the creatures. It had never been the Taion’s fighting skills against the Anthorian’s, it had been their sheer numbers.

The Anthorians were a primitive race that had at one time been slaves to the Taions, but no more. The Taions were an arrogant race, for hundreds of years they had ruled Doran with an iron will from the sky. Teaming up with Dragons, they could not be beaten, or so they believed until their largest cities were breached. In less than one hundred years, they had lost most of their knowledge of how to make and grow their foods. Only a few could read and write the textbooks that had been saved in this small clan.

Gregor remembered Zerfferon their last real Queen she had ruled with a gentled hand, looking to the safety and health of the clan first. She had kept alive the old ways making sure all of the young knew how to read and write. She chose who would learn medicine, weaponry, and farming. It was on her insistence Gregor had learned how to make their many weapons and hunt. He was the clan War-Chief. When she had died leaving Nefferon only ten years old as Queen, his nephew Erron took over the clan leadership. Nefferon was made to remove her heartbond with Frayon, Erron’s younger brother to marry him. Now thirty years later they were fighting for their lives.

Linda Scott is also part of The Peacock Writers and her second book starring Frank, a Pug, is almost in completion. Lyla, Frank and Missy go … Well we must wait to see what that story entails.
Here are Linda’s latest links:
http://giftsofdawn.wordpress.com/ blogsite
http://www.facebook.com/profile.php?id=100000528096411 facebook
http://astore.amazon.com/gifofdaw-20?_encoding=UTF8&node=350 my aStore