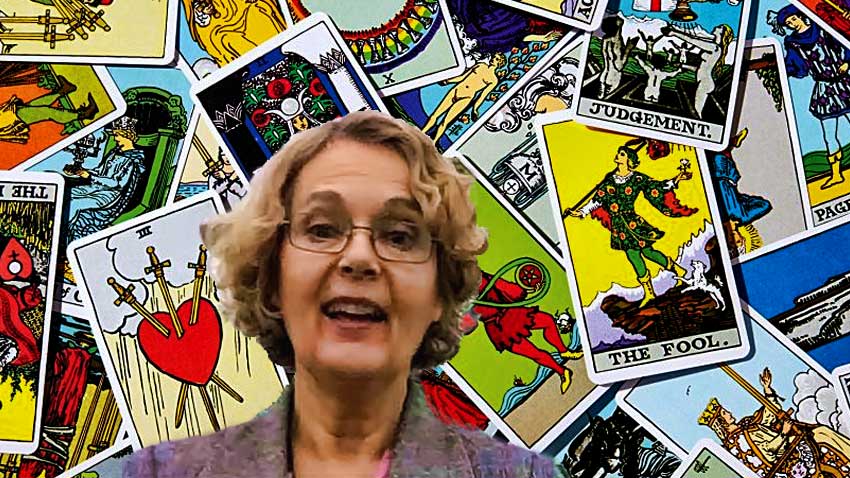 Jackie Lewis is an author, an artist, and a psychic who has written two books. One on The Secrets of Reading Tarot Cards and one on how to see the Aura, The Magic of Auras.

She used to own and manage the Psychic Centre & Bookshop in Toronto, Canada for twenty years, from 1991 to 2013, and her old website is still up though not updated and has free information about what’s in my books on that site.

Your background: Who are you, and where are you from?

I was born in London, England, and immigrated to Toronto, Ontario, Canada, when I was eight years young with my parents and two younger brothers.  After three years in Toronto, we moved to Bramalea, Ontario, where I discovered farms and horses and then moved to Georgetown, Ontario. After graduating from grade twelve, I decided to move back to the City of Toronto were the “action” was, and I got a degree at George Brown College.

I now primarily write and paint. I have three books in the process and usually four paintings on the go. In my abstract paintings, I am able to bring forth the energies of other dimensions that will benefit the viewer and heighten their awareness. To view my paintings online, go to jackielewis.deviantart.com. I am also a psychic and do Tarot Card Readings for people on a part-time basis by phone, FaceTime, and Skype using e-transfer.

What themes do your books explore, and what do you want your readers to (Learn) take away from the experience?

Metaphysical areas, how to access the subconscious creative mind where all creativity comes from and that we are here to do and explore our talents and make money at them.  That no one is out to get us and that we have many non-physical guides around us and to ask for their guidance and assistance and that life is a process.
Everyone is psychic, I believe, you wouldn’t be able to understand anyone unless you “tuned into them” to a certain extent, and a psychic does it more so and always with permission from the other person.

My books teach how to channel Universal energy and access the subconscious mind. Affirmations are said before each psychic reading to safeguard the psychic. For example, “Love is the key, love opens many doors, I open my heart and let the energy flow (Universal Energy) without taking on anyone else’s difficulties. Because it does not help them, it does not help me, and it helps no one.” And “I am only influenced by the Highest Evolved Beings of the Light that love me and wish me well and own guides and Higher Self.” Because there are lower astral realm beings that are mischievous.

The aura book teaches to de-focus the eyes by relaxing the focusing rods of the eyes and using the peripheral vision or night vision by looking out the corners of your eyes and gazing around the outside of the head and shoulders of a person sitting with a white background. Everything about a person is encoded in the aura.

Jackie Lewis–In exploring the metaphysical I connected with a channeling source Anne Morse, who channels The Transeekers inspiring me. And then, my creativity kicked in, and I started writing and painting and reading tarot cards.

By the way, the first Matrix movie, though a dark film, opened-up other metaphysical areas because interestingly, art is another way of exploring who we are.   And I became acutely aware of what emotions I am emanating out into this illusionary world. It’s a big school on emotions because emotions create thoughts that create this reality.  I ask, “What am I learning and how to respond differently?” and “What’s really going on in this situation?” and to dig deeper.

Ernest Hemingway was very clever in using novels. The Nick Adams series that is based on his childhood to resolve issues and to share his attitude.
Henry David Thoreau. A surveyor in America who questioned the government and so-called authority figures at the time.
The Celestine Prophesy Book and movie influenced me.
Dorothy Maclean’s book, “To Hear the Angels Sing,” a co-founder of the Findhorn Community in northern Scotland, telepathically communicated with the Nature Kingdom and turned sand dunes into a garden of Eden.
Osho Rajneesh’s books influenced me. He was a guru from India that came to the United States and had many followers and wrote many inspiring books.
Nicole Tesla inspired me. He invented free energy and free information, one hundred and ten years ago. His biography by Marc Seifer features a quote from Tesla, “If you wish to understand the secrets of the universe think in terms of energy, frequency, and vibration.”
The movie, Being John Malkovich, is about the many aspects within us.

I definitively want to shy away from comparing my books to others. I’m not into that, I present my point of view, and others offer theirs.

Tell us about your latest work and what inspired you

There are many writers and artists that hold back from showing or talking about their work until it is completed. There are rewrites and there may be comments that hamper the process. So I prefer not to show my work until completed, and that’s my preference.  By the way, I usually like to have three or four books and artworks on the go, so that I can go from one to the other.