I am delighted to be able to introduce Malcolm R. Campbell

and his newest novel “Sarabande”.

Malcolm is so very generous to other authors, it’s great to be able to return the favor. Besides, he’s a damn good writer who pens powerful tales. If you haven’t yet met Malcolm, what are you waiting for? 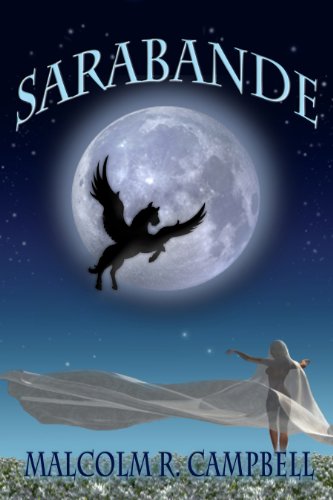 So, Malcolm, what is your book about?
“Sarabande” is the story of a young woman who leaves her alternate-universe home via a portal hidden in the Rocky Mountains in search of the once-powerful Sun Singer. She wants him to return to her mountain home and help her rid herself of the ghost of her sister Dryad who has haunted her for three years. The journey itself turns out to be worse than Dryad’s taunting and haunting. The ordeals of the trip across the Montana plains will force her deep within to discover her true strengths and greatest challenges.

How long had the idea of your book been developing before you began to write the story?
This novel is a sequel to my earlier fantasy “The Sun Singer,” so the story was on my mind for many years before I wrote it. I had never written fiction from a woman’s point of view before and avoided working on “Sarabande” until I was finally ready to confront the story.

What inspired you to write this particular story?
“The Sun Singer” is about a young man’s solar journey. I wanted to look at the other side of the coin, so to speak, and write about the lunar-oriented ordeals of a young woman. Sarabande, my protagonist first appeared in “The Sun Singer.” However, I have written her story so that it can be read as a standalone novel, a woman’s story that could be whole in and of itself.

Who is your most unusual/most likable character?
Sarabande’s sister Dryad is a nasty temptress. She tried to spoil my protagonist, Robert Adams, in “The Sun Singer.” When she attacked Sarabande near the end of that novel, Sarabande killed her in self-defense. As it turns out, she’s even nastier as a ghost than as a living woman. Basically, he’s an all-about-me character with few morals and fewer restraints on what she’s willing to do to hurt other people.

How much of a story do you have in mind before you start writing it?
I know only the major plot points. I try to follow my stories as they unfold. While I already knew about the major ordeals Sarabande had to face, I knew little else. When I finished one chapter, the idea for the next chapter came to mind. It was almost like the character was sitting next to me handing out her story a little bit at a time. Needless to say, writing this way means that I end up being surprised by many of the things that happen. I tend to do a lot of research while I write because I like placing my fantasy scenes in very real settings. While reading about those settings online, I often think of new wrinkles for the plot that had never occurred to me before. I love the process of discovery.

Did you do any research for the book? If so, how did you do it? (searching the Internet, magazines, other books, etc.)
All three of my fantasies are set partly in Glacier National Park. However, since I haven’t been there for a long time, I read a lot about the park online as well as in my reference books and magazines while writing. Sarabande, for example, sees popular lakes, mountains, and trails in the park. I want to make sure that I have the descriptions right as well as how far apart they are from each other—I don’t want my character hiking between them faster than it’s possible in real life. At the same time, I’m always checking the blooming seasons of the wildflowers I mention, the typical times when the snow melts off in the summer, and the habits of the animals that appear in the book. I want the readers to feel like they are following my character through the glacier-carved valleys of the area called “the backbone of the world.”

How do you develop and differentiate your characters?
I “see” the characters the way one “sees” things in his or her memory. When they appear to me, they develop ways of talking and moving about it a physical space. Since I have no knowledge of women’s clothing or hairstyles, I’ll have a general idea about the look I want, but I’ll either ask my wife or look things up online to find out what a certain kind of clothing or hairstyle is called. Once in a while, I’ll see a celebrity picture that “looks just like” my female character, and she will become a model for them—but only insofar as looks, posture, facial expressions, etc. When the characters interact with each other, they act as they act. This seems more natural to me than, say, making a list of characters and then jotting down a list of characteristics for each. They grow, of course, as the novel moves forward and, for a writer, that’s fun to watch.

Do you have specific techniques you use to develop the plot and stay on track?
I usually write straight through the novel from beginning to end to see what’s going to happen. Occasionally, a scene will feel wrong, too long or out of place, and I’ll edit it or move it. Or, something will occur to me in chapter five that needs to be foreshadowed earlier. Writing on a computer makes it very easy to cut and paste, move things around, or go back to earlier parts of the book and drop in a bit of material. Most of my ideas for what I’m going to write next in a novel-in-progress occur to me while I’m going other things. This gives me a lot of time to think about them, tinker with them, and mull over the impact they might have on earlier or later scenes in the book long before I start typing them. This keeps things on track because the story has a natural flow to it that becomes apparent as I “live it” from day to day. My wife always knows when I’m writing a novel because I walk around like somebody who’s either possessed or off in another world.

What is your goal for the book, ie: what do you want people to take with them after they finish reading the story?
My goal is always to tell an interesting and absorbing story. I don’t write with an agenda or in hopes that when the reader gets to the end of the book an apparent “moral of the story” will jump out at them. All of my fantasies are “nature-friendly,” so readers are always going to be experiencing the location settings in the novels in a “green” manner, so to speak. Sarabande faces issues that often come up in patriarchal societies. Reading about how she deals with these issues may provide readers with another perspective about women’s rights and about the bonds between women and the natural world. But first, I want readers to get wrapped up in the drama, the humor, and the unforeseen plot twists, and have a wonderful reading experience. Going away with “food for thought” is icing on the cake.

What challenges did you face as you wrote this book?
I write from a third person restricted point of view. This means that I am always with only one character from start to finish; everything in the book is filtered directly or indirectly through that character’s eyes, ears, and thoughts. The challenge here, especially with some of the deeply personal women’s issues in the plot, was putting myself into a woman’s point of view and keeping it real. I did not want the book to sound like it was written by a man who was speculating about how a woman might talk, act, and react to the ordeals in the storyline. The challenge was making the story truly seem as though it were being told by a woman and that all of it rang true to the women reading the book.

What’s your writing schedule like? Do you strive for a certain amount of words each day?
I do everything possible to avoid having a writing schedule, much less a daily word-count goal. The story unfolds as it unfolds. I don’t know what’s going to happen next, much less when my characters or my muse or the universe are going to fill me in on the next scene or chapter. Sitting down to write at a specific time or forcing out a set number or words each day would ruin the flow. This sounds like a lazier approach than it is. Whenever I have a novel in progress, I am rather obsessed with it. It is always on my mind. Basically, I’m much better off when I’m actually writing it than when I’m not writing it.

Where can people learn more about your books?
My books are published by Vanilla Heart Publishing and are listed there on my author’s page. I’ve been posting about the experience of writing this novel on my Sarabande’s Journey blog. “Sarabande” first appeared on Kindle on August 13 and is expected to be released as a paperback August 31. Thanks so much, Pat, for chatting with me about my work. Your questions force me to think more about what I’m doing and why.