I want to introduce you to Daniel Friedmann – he has written a science and religion book that talks about how Genesis and science actually agree on the timeline for the origins of the universe and the appearance of life.

This book will provide families with hours of conversation about our origins. This interview will tell you the motivation behind the book and explain why Daniel Friedmann started writing.

The book is being well received by much of the religious world – although some of those that hold to a literal 6-day interpretation of Genesis have issues with it. Several scientists have read it and found it thought-provoking. 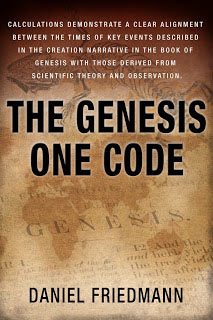 Families, religious enthusiasts, and science enthusiasts would enjoy the book: teens and young adults who want to learn more about our origins. I wanted them to know that the Bible actually has answers to questions that remain unanswered by science. Since I started writing the book, I have seen interest from all ages.

At what age did you discover writing, and when were you first published? Tell us your call story?

I write when I have something unique and new to share. I started writing in earnest at University, publishing scientific papers. The Genesis One Code is my first book.

I studied engineering and religion. I am a CEO of an aerospace company in Canada, specializing in robotics used on the international space station. I have a master’s in engineering physics and 30 years’ experience in the space industry. I am a longtime student of cosmology and religion.

The Genesis One Code

covers such topics as how the genesis (the first book of the bible) and the scientific perspective of the development of the universe and the appearance of life on earth align and the few instances where the genesis and the scientific view of the development of the universe and the formation of life on earth differ. When humankind was created from a spiritual and scientific perspective and what Adam and Eve were really like. What is the big bang theory and how it relates to the creation account, and much more? You can find out more about my book by visiting my website or going to Amazon.com.