Author of the Tarkeenia Series: The Unseen Promise / Lover of Epic Fantasy.

Tell us about your background; who you are and where you are from?
I am a native Australian, born in Adelaide, South Australia. I am a mother, a social media maven and an author who loves what she is doing – writing. 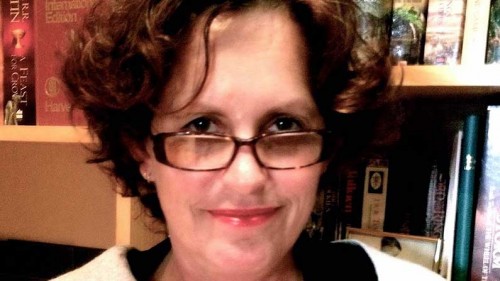 You will find me on a plethora of social networking sites, from Twitter and Facebook to RebelMouse, Goodreads, Linkedin, Tumblr and Pinterest as I connect with readers and other authors on various platforms.

As a Fantasy Writer, I am self-indulgent in the belief that anything is possible in the writing world.

Dark, epic and high fantasy is where I dwell, so grab onto your seats, settle down with a cuppa or two and lose yourself in the worlds I have created.

I admit that I fall I in love with every one of my characters and am thankful they are a part of my life, and it is my pleasure to share them with you.

I am currently working on a subsequent manuscript and am involved in various writing and creative communities. I write under the pseudonym of my children’s middle names – Ellen Mae Franklin. My books of traditional fantasy carry an undercurrent of dark threads and as such, do not have definitive heroes, or happy endings, expect instead to be immersed in worlds of twists and turns, an entertaining journey for your imagination and soul.

What themes does your book explore and what do you hope the readers will take away from the experience?  Is there a particular feeling or experience that you hope to evoke in the reader?
It is my intention, as I explore the diversities of traditional fantasy to share my passionate insight with readers and the community we live in. We are visual beings and as such, it is crucial that I impart the visage of what I see, putting my story down in such a way that the reader, through my words can visualize my characters and narrative.

Since my stories stem solely from an imaginative point of view, I do not follow a theme and only wish that with each book read, it is received with a glad heart in knowing that they have been taken on an adventure or down a path of discovery. Each of us can say, we are often hampered by daily structure and responsibilities, finding it difficult to escape the rigorous demands of work and family.

My stories allow the reader a chance to escape for a short while in worlds that allow the impossible to become possible, where the improbable in my tales are most certainly true in a world of fantasy.

I do not often insert messages into my stories but in the Tarkeenia Series, I do wish to impart that curiosity can be the veritable fork in the road. Every decision made in the name of curiosity will carry certain actions that surmount in particular circumstances, changing the course of lives and even sway the outcome of history for generations to come.

Through my books, I hope to show readers the power of what fantasy can offer in literature and that the imagination, the inner child can delight in exploring the wonderful worlds of the bestiary.

What prompted you to be an author and did you have a specific inspiration in mind? Were you influenced by a certain persons, artists, or genres?
I have always enjoyed reading, in particular fantasy. As a child I can, like most writers, recount numerous times where I fell asleep with a book pressed to my nose. With this in mind, it was never my intention to reach adulthood and write a novel, nor was it the words of other writers, which swayed me to labor over the stories I write.

There are mainstream authors, who I admire through reading their books that have, during my creative years of writing, probably helped to define my writing style. My books carry a certain amount of colloquialism and wit that is native to Australia and may at times seem intrinsic to other works by their local authors.

If you could compare your book to any other existing works, which ones would it be and why?
This is a difficult question to answer due to the genre and nature of my creative works, for each story is an original interpretation of the worlds I create. If I was to make a comparison, and it would be a long stretch at best do so, would have to say that the period of my most of my settings take place in times equivalent to that of earth’s medieval times.

I work traditionally to creating characters that may be elemental in their birthing or unique to my imagination. I am in the belief that it is important to retain uniqueness and originality when creating a new tale and therefore, I tend not to base what I write on something gone before.

The Unseen Promise / Book 1 The struggle between God and man, magic and indefinable evil is without recourse.

Roedanth wants his brother back; it doesn’t matter that the boy is dead; the young copper apprentice can’t stop wishing. Tainted by the magic of the Dark God – Drakite, tragedy and pain follow Roedanth all the way from Crows Nest to the Halls of Coowic, where the Magi live.

Tarkeenia is awash with life – man and beast live side by side. Monsters hunt the shadows looking for a bite to eat. The tip of balance between dark and light, good and evil is tenuous, even on a good day. Flesh eating Specks turn the living into dust, and the world is no longer safe. Murrdocks are a child’s story, woven tales told to enchant and incite fear, but myths soon unfold into reality.

Strangers become friends, out of necessity more than compatibility for survival takes on the order of the day. Uneasy alliances are tainted by betrayal and self-gain, and unlikely heroes emerge to salvage what they can in the world on the brink of chaos.

Everyone strives to make do in a world bubbling with wild magic, working to remain true to their Calling, as the lives of man and monster hang in the balance, subject to the whims of Gods. Can Tarkeenia survive the tug and pull of the very spoilt, and the very wicked? Can those lost to the dark find a way back to the light? Is it possible to forget, or to forgive and begin again? All these questions and more are answered as the reader walks Tarkeenia’s many paths.

Co-writing with an author from the United Kingdom, Peter M. Emmerson, we have released the first two books in the new epic fantasy series The Un-Named Chronicles – Forthright and Clement and Armitage and Envy. The sequel to follow is currently a work in progress and is titled Maub the Dreamer.

Forthright and Clement / Book 1 – The use of Magic is forbidden…

The Un-Named, the magic wielders are loathed, reviled and feared for being different: forced to hide from constantly searching eyes, from the eyes of those who would strive to expose them to The Render. As the Un-Named struggle to acquire their rightful position in the world that has hated and persecuted them for centuries, a fearsome danger escapes from its five-hundred-year-old prison. Two extraordinary companions begin a journey to discover the origin of the strange phenomena that is allowing wild magic to leak into the world, but they aren’t the only ones who are interested in the source.

The world is under threat of total destruction and only through the powers of magical arts, can it be saved and protected.

But the use of Magic is forbidden…