David Grey Eagle is the leader of the Mohawk Bear Clan in the Rouge Valley. He is planning to release a book called The Stained Road.

He is a practicing shaman who is involved in Aboriginal-related issues and in conservation activism and talks.

In the past, he fought against the Canadian government for equality for his tribe. 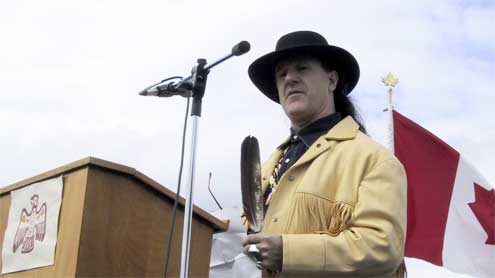 Recently, he led a charge against development in the Rouge Valley.  Eagle and his wife picked me up and drove to the Metro Zoo to undertake a Solstice Bear Ceremony.

On the way, he recalled a situation where he fought against developers, who intended to build on sacred land where an ancient village of Iroquois once lived.

At this location, archeologists are reputed to have found traces of artifacts in the field. For generations, the elders have known a bone pit, or an aboriginal ossuary had existed in this area.

At that time, Eagle recalled getting a phone call from an environmentalist. “You can’t build a subdivision on a water plain,” he reiterated his outrage as we traveled.  Three days before the bulldozers came; Eagle and other concerned citizens built a tipi, preventing the building of this subdivision on sacred land.  In such a predicament, they promised to occupy the location for fifty days.

There were no drugs and no alcohol. “We signed an agreement with the authorities,” he continued, “promising no bad behavior. “ Their intention was to preserve the land because it belonged to their ancestors.

In time, the developers wanted four million for the land. The media came. One Saturday, the aboriginals built a great fire. Something strange happened that night. The fire made a hissing sound and shadowy forms manifested from it. “There are spirits here,” said Eagle’s wife, “they want to speak to us.” Eventually, the ancestors communicated that great wars and sickness had visited this spot.

“They said they were here to support us,” recollected Eagle, as we approached the Metro Toronto Zoo Parking lot.  “And to help stop the developers,” he continued, “It was like the old ancestors had come from a lost world to support us in our endeavors.” More media came, including more people, and the spirits remained to encourage the movement.

“We’ve lobbied for years,” he went on, “we’ve kept our word with the developers. The place has now been bought by the City of Toronto for 20 million.”

“What is the place called?” I asked the medicine man.

We now arrived at our intended destination.  We entered the zoo. Eagle, his wife, and Mary Raynor, a native recording artist, all dressed in ceremonial garb.  They took a small drum, incense, and a large turkey feather and journeyed by golf cart to the Grizzly Bear Pen.  It was here where the Solstice Bear Ceremony came alive.  It didn’t take long for him to conduct a prayer ceremony, invoking his ancestors and the need for all Rainbow Warriors to fight to save nature.

Such an event prepares the animals for hibernation. This is the first time they have allowed members of the public to view this ceremony. They plan future events, including an event at the Pandas Pen and Polar Bear location.

Eagle has lived in the Rouge Valley for fifty-seven years. He is from the Mohawk Bear Clan.  “Bears can smell you five miles away,” he told the members of the public who were visiting the Grizzly Bear Pen. “If they smell you once, they remember you for 20 years. It is not right to stare at them directly or to turn your back and run downhill. If you do run away from a grizzly, run upland and they won’t follow you.”

He began the ceremony, keeping all the observers informed on what he was doing. Eagle called himself a Rainbow Warrior. “I teach, I heal, and educate our brothers and children on how we should protect our water, protect our water like our blood—we should take care of our water because it is disappearing all over the world.”

Eagle boasted that he knows the Rouge River like no one else. “I know where every burial ground is, all about my ancestors, every tree, and leaf is. I know every inch of this river.” He recounted a time where great freighters would travel up and down the Rouge River, until Hurricane Hazel made such a journey impossible.  “We are now being interactive—bringing our ceremony to YOU!

I have worked with the elders. As human beings, we must all give something back. Why can’t we give it to them! We should all be Rainbow Warriors. It’s what we can do for the planet. The Great Spirit spoke to me—my elder taught me for 57 years. My grandmothers once said don’t forget the three L’s—To live, to Love, and to Laugh! What you take is what you give. We should give. “Eagle offered endless praise for the Metro Toronto Zoo for its effort to help preserve and take care of the animals.

After he had spoken, Mary Raynor, a fellow native, and recording artist came forward and sang before the gathering.  She even noticed that one of the Grizzly Bears had sat down, appearing to listen to her performance. “I never sang to a Grizzly Bear before,” she laughed.  After an hour, Eagle joined an official to feed the Bear honey.

Eagle has come to visit these animals since he was age thirteen. He has always visited them in private. Eagle feels by bringing his ceremony public, his message of environmentalism will be kept alive and spread.  Such an occasion was edifying and memorable.  If you wish to donate to the Metro Toronto Zoo, go here.

If you wish to buy native songs, go to www.maryraynor.com.