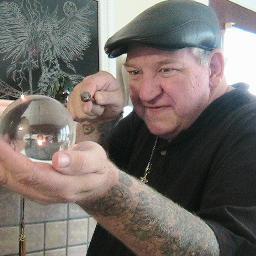 Paul DeThroe- Hi Paul. Thanks for this wonderful opportunity! I live in Cincinnati, Ohio, USA with my three children and my granddaughter. I am originally from Kentucky but migrated north in my teens.

Paul DeThroe- Fear. Everyone has fears; I try to invoke them because I believe it’s better to face your fears than hiding from them. My writings often take societal norms and turn them on their heads. In The Devil’s Prophet, I change the end-times story of angels and demons fighting for human souls into invading aliens. In Suffer the Witch chronicles the underlying theme is the occult, and how both good and evil can reside in that spiritual realm.

Paul DeThroe- My favorite authors are Ernest Hemingway, J.R.R. Tolkien, Mark Twain, and Bernard Cornwell. That group is all over the place! So, I would have to say I don’t have a favorite genre. I don’t want to be pigeonholed into writing only one genre either. I proclaim myself to by a dark fiction author because I switch back and forth between writing Sci-fi, Horror, and Fantasy. I stay fresh as a writer that way. I started writing because I saw it as a form of self-expression which I could use to take these fantastical images I see in my imagination to the masses for entertainment purposes.

Paul DeThroe- That’s a good question, Paul. I think The Devil’s Prophet was a response to the Left Behind series, where all the ‘good people’, if there is such a thing, are taken to Heaven, while the rest of us are left here to struggle. I don’t see it that way. I think that if Apocalypse happens, we are all going to suffer. I see it every day on the news. Suffering has become a way of life for many folks in today’s world. Perhaps it has always been that way. With Suffer the Witch Chronicles, I wanted to make a more realistic version of witchcraft, so even though it is fantastical, with shape-shifting dragon wizards, it does contain true to life occult themes, not watered down kiddy stuff as you see in most modern movie fantasies. It’s kind of like Harry Potter on steroids.

Paul DeThroe- Suffer the Witch Chronicles debuted in May 2012 with Rise of the Raven Knights, which is Vol. 1 of a trilogy. It is a yarn about Gazzy Windstorm, who is blessed, or cursed, with the powers of shape-shifting dragon-wizardry. He and his magickal sister join forces to lead an order of undead, immortal Raven Knights into battle against diabolical witches hell-bent on world domination. Vol. 2 Quest of the Onyx Dragons and Vol. 3 Age of the Fire Dragon are in the editing stages and should be available in 2014.

The project I am working on now is tentatively entitled Harvesting the Sacred Groves is about a comatose man who is subject to dream control experiments from a mad scientist. When he escapes, he believes he is a warring messiah with demigod-like power who has come to destroy the evils of humanity and start a golden age.

Paul Collins –Thanks for taking the time for this interview. All the best!

Excerpt from Rise of the Raven Knights

I allowed my mind to become blank and ignored everything that was happening around me.  The butterflies and bees flying around me looking for nourishing nectar in the garden’s many flowers became a part of the fiber of my being rather than a distraction.  I knew I was ready. I began imagining the angels of cardinal directions standing around me at their posts, guarding me as I journeyed between worlds, ready to destroy anything that might endanger me with their mystical swords of fire, wind, air, and ice.

I felt completely safe and comfortable and once again began conjuring up a circle of fire that surrounded me.  This time the circle of fire more than smoldered.  I could feel the spiritual power inside me begin to rise and with it the ethereal blue fire of my magickal circle began to rise with it.  Within moments, the fire burned so strong and tall that I could no longer see Lori or the Lady as they set outside the circle.  I was in complete command. 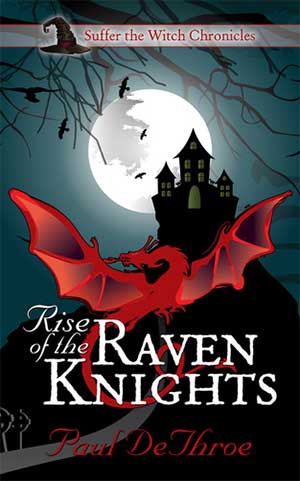 Even though I was a total rookie at performing magick, I could feel my confidence build by leaps and bounds.  I knew nothing of spells but like a moth to a flame, I could feel my mind astral travel to the sacred spot of the Strum Witch.  I began reading from her Tome and saying the words to spells I had never seen before.  Soon my power had risen to a point where I began to feel like I was unconquerable.  My spirit returned from the darkened room that housed the Strum Witch’s magickal tools and back into the magickal circle.

My spirit was on fire with positive energy and it flew high into the sky in a fast-spinning vortex of flames and transformed into the shape of a fiery red dragon.  I spread my wings for the very first time and flapped them, not knowing what would happen next.  I began to fly across the sky, just under the gathering clouds.  We had decided that I would only train at night to avoid scaring the people of the community.  The last thing I needed was real life, fire breathing dragon to put on exhibition on YouTube for the whole world to see.  I had to avoid anything that would bring people to our town to gawk because that would just cause more people to suffer at the hands of the evil McCracken witches.  I could still feel the radiating heat of the flames from the magickal circle that burned on the ground beneath me, even though they became invisible from my altitude.  It was like I was flying in a bubble that coursed me through the sky at my every whim.  It was a movable force field and I felt like I could fly forever.