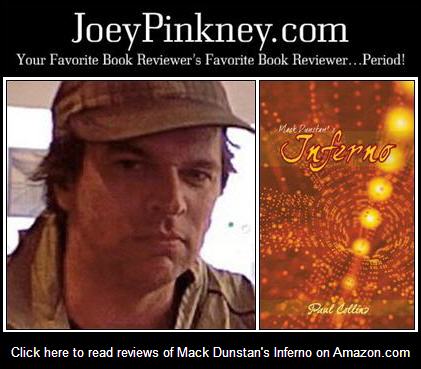 Yes, as he descended into hades, he met oodles of Hollywood celebrities, both living and dead, including Kelsey Grammar, Sally Struthers, and JK Rowlings. There is even a comical scene with Woody Allen, too. This is a modern-day Divine Comedy!

Joey Pinkney: Where did you get the inspiration to write Mack Dunstan’s Inferno?

Paul Collins: Mack Dunstan’s Inferno was inspired by the documentary “Bowling for Columbine“, where Michael Moore challenged actor Charlton Heston on his role in gun rallies on the week of a massacre at Columbine High School.

Well, the Heston Estate forbids the use of Heston in the work, but iUniverse has published it because I changed Charlton Heston into Mack Dunstan, and the paperback is called Mack Dunstan’s Inferno.

JP: What sets Mack Dunstan’s Inferno apart from other books in the same genre?

PC: Mack Dunstan’s Inferno is about the death experience without the dogma of organized religion. It is also about the victims of violence, not the guilty who are being punished for their crimes. It is every day average people, including politicians, and Hollywood actors, all adding humor, or insight into the work.

JP: As an author, what are the keys to your success that led to Mack Dunstan’s Inferno getting out to the public?

PC: This book mentions names, some famous, some not. Mack Dunstan’s Inferno is a reflection of our society, a sight we would not like to see, but we have to see it and understand it to make this world better. Essentially, sometimes you have to walk through the mud, to smell the roses!

You will never find a book like this endorsed by Oprah, or any other celebrity. This is not the usual fluff from Daniel Steele. Mack Dunstan’s Inferno has its own personality, and it is unapologetic about the sight it reveals. It is an anti-celebrity literature book!

JP: As an author, what is your writing process? How long did it take you to start and finish Mack Dunstan’s Inferno?

PC: The only way I can scribble is to daydream. The idea comes from a stream of consciousness before I start following a structure. This idea also came right from “Bowling for Columbine” and reading Dante’s Inferno. I started writing it in May or June of 2004, and I finished it at the end of February 2005.

Someone actually had to encourage me to put this on paper. But once it came, it flooded the pages, and I was pleased. I remember reading Dante’s Inferno, taking notes along the sides, finishing the book, and then typing up the notes. Such a memory makes me smile.

JP: What’s next for Paul Collins?

PC: I have worked in film and TV for over ten years. I meet a lot of crazy characters in my position. I find if you work with someone for 12 or 14 hours, you will get to know a person more than you plan. Some people leave a lasting impression because they may do something private.

I wrote a fictionalized version of all the crazy stuff I have heard on film sets. I will not name names. I am pitching it around but things take time. I hope to get it out in the future.

An Afternoon With a 3-year-old Princess