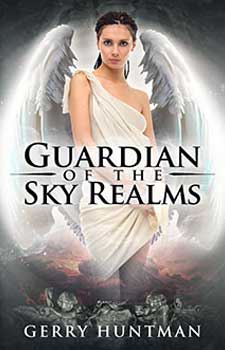 Maree Webster is an ‘almost-emo’ from the western suburbs of Sydney. She hates school and only has a few friends.

She has an obsession with angels and fallen angel stories. Life was boring until she one day decided to steal a famous painting from a small art gallery. Her life will never be boring again. She meets a stranger at the gallery who claims to know her.

She stumbles into a world where cities float in the sky, and daemons roam the barren, magma-spewing crags of the land far below. But not all is well.

Maree is turning into something she loves but at the same time, fears. Most fearful of all is the prospect of losing her identity, what makes her Maree, and more importantly, human.

Guardian of the Sky Realms takes the reader on a journey through exotic fantasy lands, as well as across the globe, from Sydney to Paris, from the Himalayas to Manhattan. It’s about transformation.

This is an excellent story that starts out with a revelation and becomes an adventure. The action and turns never let up. I enjoyed Maree’s gradual discovery and acceptance of who she is.

It was very well done and believable, despite the fantastic circumstances. I enjoyed the intermixing of the two worlds. It gave it a ‘real’ grounding that was important..

The world of the Sky Realms is rich and vividly drawn, and beautifully described. My favourite character was, surprisingly enough, Darius.

An enjoyable tale that was easy to read. Highly recommended.
▬ Elizabeth Lang
Aauthor of The Empire series

Guardians was a pleasure to read. Truly enjoyed the imaginative world author, Gerry Huntman, created in his debut novel.

If you’re looking for a great fantasy full of wonderful characters this is the book for you.
▬ Charles Day
Bram Stoker Award® -nominated author of The Legend Of The Pumpkin Thief, Hunt For The Ghoulish Bartender & Deep Within


GUARDIAN OF THE SKY REALMS
By Gerry Huntman

It was a balmy night but Maree shivered, buttoning up her coat. It was fear. Not for something specific, but the unknown—the back lanes of The Rocks were dark and menacing at midnight.

This was one of the oldest parts of Sydney and many of the narrow buildings she silently passed were over two hundred years old. In the old days footpads and other villains frequented the narrow byways. They killed for a few shillings. The history of the area was tangible; you could smell it, taste it, and every shadow seemed to form into a knife-wielding psychopath.

Maree kept reminding herself that she had an overactive imagination as she continued down Kendell Lane, looking for No. 42. Still, she glanced over her shoulder every few seconds.
“There,” she whispered, when she spotted the rusty number in the dim light. The sign underneath it read: ‘Azimuth Gallery – viewings by appointment only’. Not this night.

Maree made sure no one was in sight. She pulled out a pair of stiff wires and clumsily picked the old lock, following the instructions of a dubious website she had looked up the previous night. It took a while, but she won the struggle when she heard the tell-tale ‘click’.

She quickly entered the old building and shut the door. She pulled out a pocket torch and switched it on, immediately flashing it around to get her bearings. It was, in some ways, scarier in the gallery than in the lanes, as the paintings in the shadows seemed to come to life, shifting as the torch flickered by, the eyes of abstract figures seemingly following her. She shivered again, wandering into the next room, picking up her pace as if to avoid the gaze of the phantoms behind her.

Her torchlight almost immediately found the painting she was after. Wings in Despair. The picture she saw on the Web; the magnificent work of art she had to have. This was not going to be theft for profit—this was for her.

She had been dreaming about the painting for weeks, the swirling reds, greys and oranges of barely discernible winged figures; angels perhaps, but the subject matter wasn’t angelic. There was grief and death in it. She needed to study it alone, to absorb the artist’s impression, to feel the bumps of paint under her fingertips, to grasp the complete meaning of the work.

Maree held her breath and approached the painting. It was larger than she thought, almost four foot square. The colours were also richer, more vivid, and the winged man and… yes, woman! were more evident. She was in awe, frozen with wonder before it.

“A beautiful work, no?” came a deeply masculine voice from behind her.
She started in surprise, but she didn’t move an inch. She was now frozen with fear.
The voice came again, this time a little closer. “Do not worry. I am a stranger in this gallery as well. I too have an…affinity with the painting.”

A sweat bead ran down Maree’s neck. She found the courage to turn around. A tall man stood before her, no more than five feet away. He had short-cropped hair—light, but the exact colour was unclear in the shadows. His eyes were pale, perhaps grey; his face was thin but his body seemed full and fit. It was hard to tell what age he was; perhaps in his late twenties, possibly older.

Gerry Huntman is a writer based in Melbourne, Australia, living with his wife and young daughter.

He writes in all genres of speculative fiction, with a tendency toward dark tales.

He is also the Chief Editor and Managing Director of IFWG Publishing, and IFWG Publishing Australia (which, in turn, publishes the speculative fiction eZine, SQ Mag).

He has published over 50 short fiction pieces and this novel, Guardian of the Sky Realms, is in a new edition, superseding a US version.

Gerry was one of those young people who didn’t know what he wanted to be when he grew up, so he tried all sorts of things, at university, as well as vocationally.

In the end he settled for two undergraduate degrees and a masters degree, mostly in computer science and IT, but no small amount of anthropology, English Lit and History.

Gerry has created fantastical worlds since he was a young child and was a creative influence in the Australian Roleplaying scene for decades.

Recently he made the decision to write seriously for publishing and has already published a dozen short stories in many journals and anthologies.

He is working on epic fantasy, its sequel, and a modern-day science fiction action-adventure.