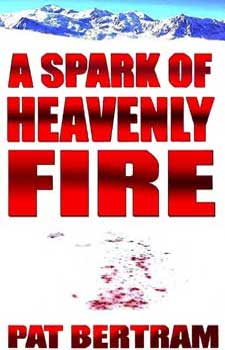 By Aaron Lazar
Who says you can’t squeeze romance into a thriller? And while you’re at it, how about weaving in a deeply moving story about human redemption?

Author Pat Bertram says you can. And she’ll convince you before you can say chimera — the lethal combination of virus, bacterium, fungus, and human genes that causes the rapid spread of the “red death,” a bio-engineered weapon threatening the entire state of Colorado.

Kate Cummings is trying to deal with the loss of her husband, who drove his car off a mountain after a long battle with Multiple Sclerosis. She passes by his bedroom without daring to enter, and slogs through life in a solemn daze, feeling guilty for every time she waited a few extra minutes to answer his summons, or for each time she became angry. His loss haunts her, and although her work at the Bowers Medical Clinic is fulfilling, it can’t heal the hole in her heart.

When a jogger stumbles into Kate with red eyes blazing, he vomits blood on her and dies instantly. A rash of similar deaths follows, decimating the state. Orange paint markers on front doors –– signifying a “red death” in the marked homes — begin to appear with frightening regularity. Panicked parents discard their red-eyed children, fearful of contagion.

The tension in A Spark of Heavenly Fire is electric. Taut suspense pulls you along at a rapid pace. This reader was up way past his bedtime three nights in a row. And yes, it was that good.

A SPARK OF HEAVENLY FIRE

Pippi watched the two boys come nearer. With their eyes alit with laughter, they looked young and innocent, like children playing a game.

The larger boy stopped, raised his rifle to shoulder height. All at the same time, she felt something whizzing by her face, heard the crack of the rifle, and saw a piece of bark flying off the tree next to where she stood.
She stayed rooted to the spot. She knew she should run, wanted desperately to run, but her body refused to cooperate.

Jeremy grabbed her coat and yanked her behind a thicket of bushes, where they stood ankle-deep in leaves.
“Listen,” he said urgently. He tugged at her coat. “Are you listening?”
With robotic jerkiness, she turned her head to look at him.
“Yes,” she answered, marveling at how far away her voice sounded.
He lay face down on the ground. “Cover me with leaves.”
She gazed at him, not comprehending.
“Cover me with leaves,” he said harshly. “Now! Do it now.”

She dropped to her knees.
As she scooped the wet, soggy leaves over him, he said, “As soon as you’re done, I want you to start running. Zigzag through the trees. Make a lot of noise so they think we’re both running away. And whatever you do, don’t look back.” He turned his head and looked up at her. “Got it?”
Pippi nodded, but refused to meet his eyes. How could he talk to her like that? Blinded by tears, she finished covering him with leaves, then took off running.
The binoculars banged against her chest, branches tore at her hair, rocks tripped her, and still she ran.
She stopped for a moment to massage a stitch in her side. To her horror, she saw the boys up ahead, coming straight at her.
She looked around in confusion. Seeing the thicket of bushes and the mound of leaves covering Jeremy, she realized she had come full circle.

She glanced at the boys; they leered at her and licked their lips.
Her skin prickled.
The smaller boy, whose hair had been dyed a deep crayon blue, thrust his pelvis forward and cupped his crotch with his hand. The larger boy, blond ponytail swinging, flailed his arms and legs in a gross burlesque of a woman running.

The boys convulsed with laughter.
Still laughing, the blond boy raised his rifle. With his finger crooked on the trigger, he aimed it at her.
Suddenly the mound of leaves at the base of the bushes erupted. A creature—barely recognizable as Jeremy, with his tensed body and his rage-distorted face—sprang toward the young blond rifleman.
The boy didn’t even have time to turn his head.
Dressed in camouflage clothes as Jeremy was, it looked as if the very leaves reached out, grabbed the blond ponytail, pulled the boy close, and made three rapid sawing motions across his throat.
Blood spurted in a bright red arc from the boy’s neck.

It happened so fast that when Jeremy tossed the blond aside, the blue-haired boy was still cupping his crotch and laughing.
Jeremy turned to confront him. The grin slid off the boy’s face. He dropped his rifle and raised his hands. His eyes, the irises rimmed with white, were riveted on the bloody knife. 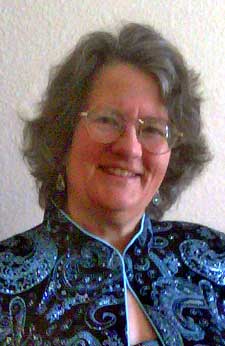 When the traditional publishers stopped publishing her favorite type of book — character and story driven novels that can’t easily be slotted into a genre — she decided to write her own.

Light Bringer:
Becka Johnson had been abandoned on the doorstep of a remote cabin in Chalcedony, Colorado when she was a baby. Now, thirty-seven years later, she has returned to Chalcedony to discover her identity.

Daughter Am I:
When twenty-five-year-old Mary Stuart learns she inherited a farm from her receontly murdered grandparents — grandparents her father claimed had died before she was born.


More Deaths Than One:
Bob Stark returns home after 18 years in Southeast Asia to discover that the mother he buried before he left is dead again.

Grief: the Great Yearning:
This is not a how-to, but a how-done, a compilation of letters, blog posts, and journal entries she wrote while struggling to survive her first year of grief.


and A Spark of Heavenly Fire

Pat Bertram is a native of Colorado.

Bertram’s publisher says: “I was told by some other small publishers with whom I had done research that I was going to get mountains of unacceptable crap for every worthy thing I received.

So when I got Pat’s manuscript for A Spark of Heavenly Fire, which was like the first submission to Second Wind, I thought, ‘OMG, is this possible?!’

I knew in the first 20 pages that she was the real thing.”