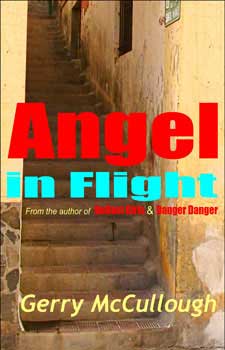 A tough and capable new female hero
By Precious Oil:

A new female hero has appeared – in the very attractive shape of Angel Murphy, a feisty wee girl from Belfast. This time around she is on holiday in Greece and the islands, where her recent difficult past catches up with her in the shape of both her ex-husband and her former employer from New York. One she definitely wants to avoid, the other is welcome – or is he?

Angel Murphy has managed to turn her life around, but now that will all be put to the test. She cannot assume that anyone is who, or what, they say they are. There is no-one she can completely put her trust in. She is on her own, in a strange, though beautiful, country, with danger and death stalking her.

The stakes are high – the lives of many more than those immediately involved are at stake.

This is apparently the first of a new series from Gerry McCullough – and it promises to be a gripping one! Angel has of necessity become a tough cookie.

If you like your female heroes to be tough and capable of looking after themselves, then Angel might be just what you’re looking for.

ANGEL IN FLIGHT
By Gerry McCullough

Sounds and movements from the outer door. A voice speaking Greek. A key rattling in the lock.

Angel glanced quickly over to the foot of the stairs. No good. She couldn’t get up there in time. Useless, anyway. It was a dead end. She ran down the passage. There was a recess to one side. Her outstretched hands clutched the handle of the door and she tugged it open.

She was in, the door pulled shut behind her, her breath coming in ragged gasps.
The outer door opened.
People coming in, footsteps and voices. Louder. Coming in her direction.
She crouched down motionless.
Footsteps growing still louder. Voices almost in her ear.
The steps went past, the voices were no longer close beside her.
The men opened the door of a room at the other end of the passage. In another moment they had gone in.

Angel pressed further back into the closet. It was deep, a small room. Only one door. No windows. A collection of junk filling up the space, pieces of household equipment. Brushes, a mop-bucket which cut her shin.
She tried to flatten herself against the rear wall. There was something in her way. She found herself backing into it.

Old clothes. A pile of them, propped against the back wall. She turned round, feeling cautiously with one hand.
She didn’t want to believe it.
Up from the depths, in spite of her efforts to push it down, came realisation.
She moved her hand carefully round. Something very cold.
She knew then.

Outside the closet, all was quiet.
Her exploring hands must have unbalanced it.
The dreadful bundle fell forward, the cold face kissing hers, the dead arms embracing her.
How did she manage not to scream?

The two men had closed their door. When she looked out of the closet there was no light from that direction, only a few faint beams from the moon shining through a nearby window. She thrust the closet door open. Half lifted, half dragged the body forward until the faint moonlight fell directly on the white face.

She recognised him immediately.
There was no doubt that he was dead. 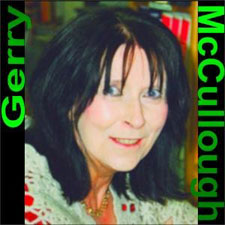 Gerry McCullough, born and brought up in North Belfast, is an award winning short story writer, with a distinguished reputation. She has had around sixty short stories published, broadcast, or collected in anthologies.

In 2005 her story Primroses won the Cuirt Award (Galway Arts Festival) and she has won, been short listed, and been commended in a number of other literary competitions since.

Gerry’s first novel, Belfast Girls, was published by Night Publishing in 2010 and has been in the top 100 bestsellers list on paid Kindle and at Number 1 in Women’s Literary Fiction.

Danger Danger, her second Irish romantic thriller, published by Precious Oil Publications, is fast catching up on Belfast Girls, as is her collection of 12 Irish short stories, The Seanachie: Tales of Old Seamus.

Her new book Angel in Flight, featuring Angel Murphy, the new Lara Croft, is now out on Kindle. Gerry’s plan is that this new book will be the first of a series about Angel, the strong-minded Belfast Girl.

Gerry lives in Conlig just outside Bangor. She is married to singer-songwriter, writer and radio presenter Raymond McCullough, and has four children.