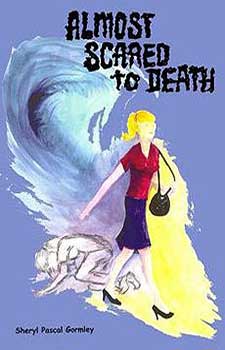 ‘Heroic‘
I can’t imagine how much courage it took to write this book. To be so afraid of anything medical and still persevere is truly remarkable. Then to put it to words takes strength I can’t imagine. Maybe it is a catharsis and aids in dealing with the unbearable. To me, it was an opening of the soul and so well written, it takes the breath away. I await the sequel..
─ GK

‘Riveting’
Anyone who has been through anything adverse in their lives will surely relate to this novel and especially anything medical, although other topics are addressed: Spousal abuse, struggles of a single working Mom, children’s anxiety, etc. Ms. Gromely leaves us with wondering: Did she have the surgery, and if so what was the outcome…and if she did not have surgery, what was outcome. I understand there will be a sequel and I am looking forward to the answers with great anticipation.
─ G. Vedder

‘Captivating’
I am a slow reader but once I started the book I was hooked and couldn’t put it down. She kept my interest the entire book & the writing is fantastic. Anxious to read her next book.
─ Iris Marion

Forty-five minutes into the journey I began to squirm a little. Several minutes more passed and, although I tried to relax, I felt the beginning of something ominous. Uncomfortable, I couldn’t sit still. Looking out the window, I could see the only physical protection from driving off the mountainside was a guardrail of sorts formed of large rocks. Feeling less safe as we continued, both my body temperature and the roadway went higher.

Although far from crowded, plenty of vehicles traveled in both directions. I began to imagine that we’d go sailing out over the edge instead of making a turn successfully. Many curves were so sharp that the road disappeared from view for a moment.
My thinking was totally irrational. Frank is an excellent driver. But, there’s something very unsettling about not being able to actually see the highway ahead while you’re hundreds of feet above sea level. Way below, as if in miniature, I could view the road and bridges we’d be going over soon–after a harrowing descent–and before going up again. It was nerve-wracking. Little by little I was beginning to fall apart. I knew it but I couldn’t stop it.

I heard myself ask him to slow down once more–maybe the fifth time, or the sixth, or the tenth–I wasn’t counting. He had already reduced speed to a near crawl. A long line of annoyed drivers followed us. They wanted to maintain the posted limit. We prevented them from moving on. The one immediately behind us hugged our bumper. Others tapped their horns from time to time.
My fingers curled and tightened into clenched fists. My stomach felt like I’d swallowed a motor. I tried shutting my eyes so I wouldn’t have to see how high in the mountains we were and how far below us the rocks and ocean were by now. And how threatening it all felt. And how near the edge we rode. But the mental image was so deeply etched that closed eyes couldn’t keep it out.

We came to a pull-off and Frank smoothly slid the car into a parking place to let the string of vehicles behind us move on. He knew no words to comfort me. I was shutting down. I felt nearly as sorry for him as I was afraid for myself. Until now he’d felt I could do almost anything I set my mind to. This was a side of me he’d never seen or had to deal with before. Although he wasn’t especially fond of heights himself, he’d looked forward to this, knowing that during the drive we’d be wrapped in natural beauty like none we’d experienced before. Now, with my erratic behavior, he was stymied. We sat there, quiet, for a few minutes hoping the traffic would clear.
“Turn around,” I begged. “Please, turn around. Let’s go back.”
“We can turn around if you want to,” he said, “but if we do you will be sitting on the side of the ocean. At least now you have the mountains to your right. You tell me what you want to do and we’ll do it.” 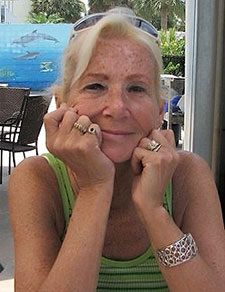 Born in Washington, D.C., Sheryl lived most of her life there, or in its suburbs, with the exception of a few years in Whiteville, NC. The daughter of a writer and an artist, Sheryl has worked in oils, acrylics, and several other mediums, the most recent being watercolor.

She is also an accomplished photographer. At the age of ten, she published a four-line verse in the Washington Times Herald for the payment of one dollar. Since then much of her writing has been non-fiction, directed to trade magazines.

Two novels and three children’s picture books are now in the works.

Flower gardening, inspired by a trip to the butterfly conservatory in Niagara Falls, Canada, is one of her hobbies. Throughout the warm months of the year, her back yard is filled with dozens of varieties of butterflies. Sheryl is animated and has a sense of humor, and as 2003-2004 president of the Ormond Writers’ League ran successful meetings with a casual observance to Robert’s Rules of Order.

Sheryl’s passions include painting, photography and writing. This memoir, Almost Scared to Death, is now complete, with two novels and three children’s picture books in the works.

She is animated and has a sense of humor, and as 2003-2004 president of the Ormond Writers’ League ran successful meetings.