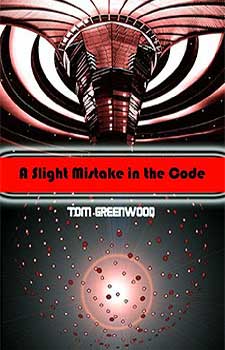 A SLIGHT MISTAKE IN THE CODE

Lost in his thoughts, Wullum Groth drove across the darkening Estoonian plain towards the multi-coloured Spoke. He was now alone and on the final stretch of his drive across two continents. Even though it had been a long couple of weeks, it was strange how everything you accept can change so radically so quickly.

With hindsight, the insurrection was obvious, but at the time, it had been unthinkable.
He felt himself falling asleep; he tried to alleviate the boredom of the drive by thinking about the coup. What was its first sign? Perhaps it was the assassination of his friend Pol Lon and the disappearance of Pol Lon’s partner.

He started to cough. He knew his lungs had been damaged in the gas attack and the subsequent fight which he and his four now-deceased friends and colleagues had had on the northern coast of Estoo.

He suspected that the gas had done too much damage to his lungs for him to survive much longer.
Nevertheless, if he could outrun his pursuers and hold on for a couple more days, he would have succeeded.

As the inner sphere grew opaque and night fell, he got his first glimpse of the Spoke that attached the ground to the sky. He desperately hoped that the insurrectionists had not reached it first.

Wullum drove on through the night. His eyes grew heavy and the wound in his left arm ached, there was no point stopping to rest now. The truck drove over a pothole as he felt his eyes close, jolting him awake. Concentrate on the mission.

Then as the sky brightened, revealing the red sun high above him, something made him look back. Under the indistinct horizon, where the ground curved up to meet the cloud-line, he thought he could see one, no two aircraft. “Shit!” he said. They would be looking for him and his prized cargo.

The Spoke was only fifty kilometres away when he heard the aeroplanes. He turned and looked behind him. They were a lot closer and they were zigzagging, obviously searching for him. Wullum willed his vehicle to go faster but it was already jumping over the uneven ground at full speed.

Ten kilometres to go and the aeroplanes raced towards him. The pilots must have spotted him. As they flew past with a roar, Wullum touched the wand in his jacket pocket. “Shield one metre,” he shouted and he felt the familiar sphere of protective power expand to surround him and the truck. He watched as the two planes banked against the backdrop of the Spoke and turned back towards him. Just before they flew past, both planes fired a missile.

Wullum reacted by forcing the truck to the left nearly overturning it. One missile hit the scrubland far to his right and exploded. It was too far away to be of any worry. The second exploded much closer, only three metres behind him. Despite the shield, the blast almost made him crash the truck. Pieces of shrapnel and clods of earth bounced off his shield partially draining it.

Wullum gripped the wheel of the truck, he thanked his meagre magical powers, without them he would have been dead. Then he cursed himself for not learning more powerful spells. 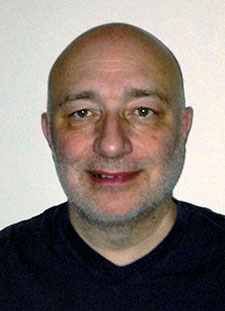 Tom Greenwood was born in Bishopbriggs, near Glasgow in 1959. As the Police sang, he was born, born in the fifties, so that means he’s getting on a bit and must have led an interesting life?
Not really.

He went to school, was rubbish at English and quite good at maths and sciences. He always liked astronomy and found the prospects of there being life on other worlds fascinating. So what did he study at university? He did zoology. Because although he was good at maths, he didn’t think he was good enough for the amount involved in astronomy.

So after his time at university, he got a job in a bank, updating and maintaining the computer systems. He’s moved about since then, contracting for a while and then moving back to a permanent job. Currently, he’s working in a very uninteresting job in a pensions company, shaking his head and getting annoyed at the nonsense that goes on around him.

Tom is married, with two daughters, and a rabbit. He was in his forties when he decided what he wanted to do when he grew-up (write stories).

Tom doesn’t like sports very much, though the football match bit in ‘A slight mistake’ was written after Scotland beat Italy and nearly qualified for something important. He does like cycling, and finds it much more interesting than running as you see more as you go further, unless you get a puncture, then it’s not as good.

And skiing, Tom likes skiing, though he doesn’t get to go anymore, having daughters does that to a person, it stops them having enough money to go skiing.

So after getting a bit fed up with work, Tom had some ideas floating around in his brain, which sort of morphed into a coherent story set on a Dyson Sphere. So he wrote it down and edited it, because the things he writes need lots of editing. And then after even more editing he decided that the English language needed some more letters, so the alphabet in his world as 35 letters, see if you can spot the extra ones.